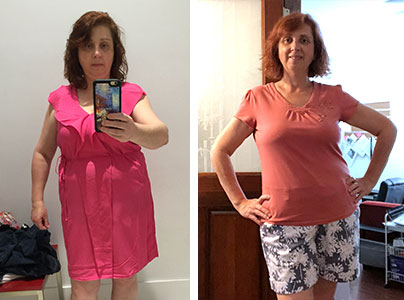 After suffering a host of ailments including migraines, panic attacks, stomach problems, Gilda lost 33 pounds and is on the road to resolving all of her health difficulties

I had been trying to lose weight since October 2017 and was put on a high protein diet, encouraged to eat more animal protein in order to do so (not red meat but chicken, turkey, fish, and eggs). I had started at 200 pounds and went down to 190 by the end of the year. I had been battling with my doctor about not wanting to take cholesterol meds to lower my high cholesterol, so I really wanted to lose the weight.

At the end of December, I started having some lower abdominal pain and didn't even think twice about taking Advil to make it bearable so I could go on with family obligations for the holidays. By the beginning of January, the Advil wasn't working and I started running a fever. Off to the emergency room to be diagnosed with diverticulitis (I knew I had diverticulosis but my doctor never went into detail about how I should proceed with my diet to avoid an infection). The emergency room doctors did what they routinely do and prescribed two powerful antibiotics (Flagyl and Ciprofloxacin). The first two days were fine except for a headache. The third day I woke up with a dark feeling in the pit of my stomach that I couldn't figure out and it felt like nausea, but I was in a full-blown panic attack.

My daughter took me to the ER again thinking that I was having a bad reaction to the meds. The doctors all thought that I just had nausea so they kept increasing my anti-nausea dosage. Later, I'd learn that the meds, along with my already existent depression plus the anti-nausea medication, sent me on an anxiety attack that lasted the entire time that I was forced to take the meds. I could barely sleep; spent two weeks of my life on the couch watching TV to help empty my mind - not even meditation was helping. That's when I promised myself I would do everything in my power to change my diet, to help my body heal itself so I would NEVER, EVER need to take those meds again.

I had read one of Dr. Fuhrman's books many years back, Eat for Health so I went online and read as much as I could in between bouts of panic. I ordered all of his books and started introducing veggie juices into the doctor recommended diet of white everything. I also decided to find new doctors that would support this new endeavor.

Now, I cook more. I don't like it so I make sure to set aside one day to make all of my salads for the week and a few of Dr. Fuhrman's entrees for the week. At first, I was the only one eating my food but now, my whole family eats it. My cholesterol is coming down (not where I want it yet but it will get there), and my resting heart rate is 58bpm. And I lost 33 pounds. I have been taking Bystolic, 5mg, for 10 years to keep my blood pressure down and prevent any PSVT incidents (abnormal heart rate). I finally got my cardiologist to drop the dosage this month to 2.5mg because my blood pressure was consistently at 107/72 for the last two months and because of the weight that I've dropped.

My migraines are gone (used to get them once a week for 2 days)! Allergies barely bother me! My IBS used to attack every week but now I've been able to go for 3 weeks without an event and even that isn't nearly as bad as it used to be. I've quit taking OTC pain meds, I've found a wonderful team of doctors (and a dentist) that believe the body can heal itself when given the right environment and I've decided to go back to school to become an RDN. There is no other way to eat for me, not ever. In about 3 years, I will have another colonoscopy and I'm hoping for really great news!