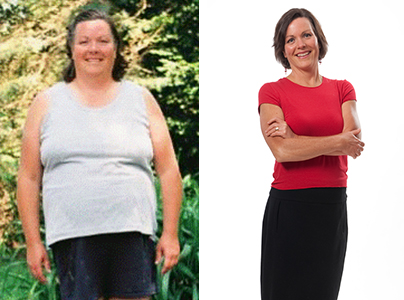 During my young adult years, I started to pile on the pounds, and by the time my third child was born, I had ballooned to over 200 pounds.  Then, by the time I delivered my fifth and last child, I was obese, and remained obese for at least ten years. My highest weight went up to 238 pounds. I had tried Weight Watchers, Atkins, and water fasting, but could only follow them for a brief amount of time, and then I would eat junk food out of frustration and ravenous hunger, and gain it all back within a short amount of time.

I discovered Dr. Fuhrman’s teachings about ten years ago. I read Eat To Live, but did not commit to the plan at the time. I knew his approach to health was the answer that I had been searching for all my adult life, but it took six more years, and a few more additional pounds, to finally get sick enough of my unhealthy lifestyle to want to change.

The testimonies in his books and website showed amazing results of not just weight loss, but people keeping their weight off, and individuals getting healthy again, and that is what pushed me over the edge to commit to Dr. Fuhrman’s nutritional wisdom. I clearly remember starting on a Thursday and, by the following Monday, I had taken my children to the beach, for the first time in my adult years I did not have “brain fog;” that general malaise feeling from unhealthy eating. To be honest, the weight loss dream started to become secondary to me from that day on because I felt so good on the inside. I was amazed how in just a few days I felt so much better, and actually had the energy to be an attentive mother.

Looking back, I realize now that I had suffered from bouts of organic depression and fatigue throughout each day, and it was nothing more than my body’s natural response to unwise food choices. I had dieted in the past, and always felt deprived and miserable, but for the first time, I was eating lots of good quality food, and feeling great doing it. That first month I dropped 20 pounds, and my cholesterol dropped from 214 to 145, so that solidified my desire to commit to Dr. Fuhrman’s nutritional wisdom for the rest of my life.

When I started, my blood pressure was 157/94, and I was scared, because I knew that I was heading straight for hypertension, medication and possibly, an early stroke or heart attack. My blood pressure was in a healthy range within two months of following Eat To Live and Eat For Health. I was also a borderline type II diabetic, and that number has gone down also. My triglycerides were 203 and within one month they had dropped to 101.

Prior to Eat To Live, I had shortness of breath after climbing just one flight of stairs. Now, I can climb a flight of stairs, and I’m not out of breath. My knees and feet used to hurt continually, and now they do not hurt at all. My family says that I used to snore quite a bit in my sleep, and now I don’t.

The weight loss and getting my health back, which is naturally happening, is secondary to have wonderful freedom from unhealthy food addictions. Freely eating nutrient dense foods has given me my life and health back, and I am forever grateful to Dr. Fuhrman for making his nutritional discoveries available to the public.

Joining the Member Center and receiving feedback from Dr. Fuhrman when I had questions, and encouragement from the other members has been a top notch place of help for me (I can't emphasize this enough).  I love the following quote by Elizabeth George Speare. It sums up how I feel. “The girl who looked back from the mirror was a total stranger, yet she had always been there, waiting.”

I started this journey to get my health back on July 10, 2008.  I weighed 238 pounds, and now weigh 133 pounds making a total weight loss of 105 pounds. I have kept the weight off for over four years, and that’s a big deal for me. In the past, I would gain weight back immediately after quitting a diet. This is for life!