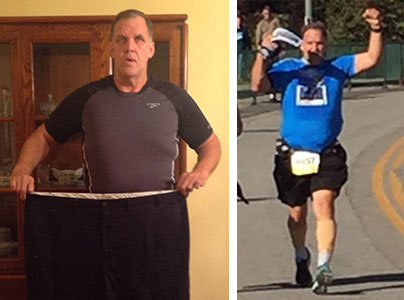 Kenneth lost an amazing 155 pounds and reversed diabetes after his doctor recommended Eat To Live;  is now running maratahons

In November 2012, I finally decided to go to the doctor because my health symptoms were becoming unbearable. It was a life changing visit. I weighed 424.4 pounds, my blood pressure was 180/140, my glucose (after fasting for over 11 hours) was 224, and my A1c test was 10.6. Of course, my doctor had to put me on prescription medication.  This was something I really didn't want and had never done before, but I knew it was necessary.

I told my doctor that I wanted to try to get off medication eventually. My exact words to him were, "I'd rather work out two hours a day than take two pills a day." He completely supported my wishes and recommended I read Eat To Live. I did and it was the beginning of a new-found life for me. I also read, watched and listened to a lot of other Dr. Fuhrman literature and information, and it has had a huge life-altering impact on my life and new found health. In December, 2012 I joined the local YMCA. My first workout I rode a stationary bike for 10 minutes and burned a whopping 39 calories. But I kept going back, almost daily, doing a little bit more and a little bit more each day. It took me over four months before I could do any running at all, but in those four months I walked over 200 miles on the treadmill, did over 100 miles on the arc trainer, over 100 miles on the stationary bike and lifted over 2 million pounds.

Update: It's four years after my original submission and I just completed my 3rd full marathon this past weekend (Nov 12th 2016) in Richmond. Three months after my 50th birthday I ran the first 5K of my life. It was hard and took me 42mins 19 secs but as soon as I crossed the finish line I knew I would run more. Little by little I pushed my limits. And a few times I failed. But after completing my 3rd full marathon this past weekend I'm proud to say that in 3-1/2 years I've now completed over forty 5K+10Ks, ten 10milers/12miles+half marathons, and three full marathons. I also started doing triathlons last year, at the age of 52, and I've completed five sprint and two Olympic triathlons. Next year I plan on completing my first half ironman at Atlanti Visy 70.3. I often mention Dr. Fuhrman’s book when I talk to people and also remind them that it's never too late to start and to NEVER GIVE UP! NEVER  EVER  GIVE UP!