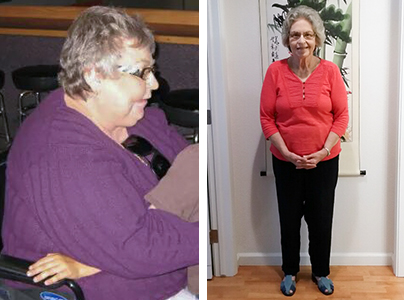 Kimberly lost 60 pounds and no longer suffers with eczema; her mom lost 142 pounds and is free of diabetes and monthly urinary tract infections

My mother Muriel, and myself, are experiencing wonderful benefits following the Nutritarian diet style.  Our story begins in 2012 when my husband and I were living in Texas, after having moved from California for a job change. I was following the Atkins diet, and although I had some results in the past, the scale was no longer moving. I weighed 260 pounds and usually felt tired and irritable.  Around this time, my husband and I watched a PBS special featuring the Eat To Live program.  We had also recently been exposed to Forks Over Knives and a few other documentaries, but the scientific information, the simple explanations, and the passion Dr. Fuhrman exuded regarding his program caused us to change to a Nutritarian lifestyle the next day.

I lost sixty pounds in four months, have amazing energy, glowing skin (having had bouts of eczema), and hair, and feel terrific!  My husband had always struggled with high cholesterol.  We had our levels checked about sixty days into this new lifestyle and all of our blood levels were the best they had ever been.

As for my mom’s story of health and healing, if anyone needed to follow Eat To Live, she did.  At 5ft. 3in. she weighed 277 pounds, was in a wheelchair, living in an assisted living facility, taking seventeen medications, had high blood pressure, monthly UTI’s (urinary tract infections), type II diabetes, lymphedema, was allergic to almost every medication doctors wanted to give her. She routinely had very small infections or bruises turn into cellulitis which, in turn, progressed to blood poisoning ten times. She had been in a wheelchair for over ten years because doctors refused to give her the hip replacement she needed to walk again due to her medical history and difficulty in healing even the smallest infection.

Growing up, my mom was always ill. She was frequently hospitalized and seemed to catch every cold or flu going around. She was prescribed high doses of Prednisone for asthma, which she took for more than thirty years.  Due to the Prednisone use, her body’s immune system was shot and she was allergic to almost all foods and medications. Even a simple UTI once turned into blood poisoning.  She had many pic-lines and porto-caths put in because she had to have IV antibiotics so routinely and always piggy backed with Benadryl due to allergies.  I cannot even count the number of times my mom almost died.

In May 2012 we moved back to California and decided to move my mom out of assisted living and have her live with us so that we could feed her properly.  We were convinced the Nutritarian lifestyle could make a dramatic difference. And boy did it!  My mom came to live with us in August 2012.  She hesitantly adopted the Nutritarian diet and within one month lost fifteen pounds and her doctor took her off of her diabetes meds as well as a couple of others.  She continued to lose weight month after month and her doctor routinely took her off additional medications, until in approximately May 2013, she was only taking thyroid medication.

In December 2013 my mother was declared “healthy” by her doctor and was given a full hip replacement. She is now walking for the first time in ten years. She was then able to have a total knee replacement (we didn’t know she needed until she was walking again) in March 2014.  After both surgeries, her surgeon was astounded by how quickly she healed, how little pain and swelling she had, and her physical therapist was absolutely flabbergasted by how well she was doing with her walking.

Today my mom weighs a healthy 135 pounds.  She has only had one small cold lasting only four days and has not had a UTI since November 2013.  She has zero food allergies and can take almost any medication including over-the-counter meds which was an absolute no-no in the past.  She is doing amazing after both joint replacements and already wants to get rid of her cane and walk unassisted.

We cannot thank Dr. Fuhrman and his team enough for the time and effort they have put into researching what and how we eat and for developing the Nutritarian eating program.  We love the food, the recipes, the website and all of the information provided to help us be successful on this program.  Our entire family is more knowledgeable, and healthier than we have ever been.  My family, and my mom, Muriel, send you a hearty thank you from the bottom of our hearts.