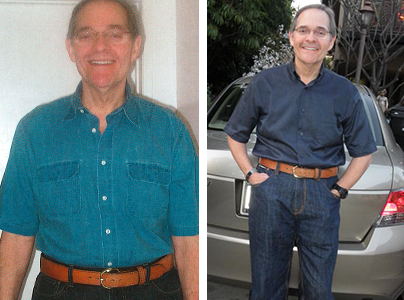 Like everyone in my family I have always had a weight problem. Then, last year, after feeling strange for several months, my sister, who has been diabetic for 25 years, tested me with her meter and my blood sugar was 491. She dragged me to the ER  where I was given two shots of insulin, and  a meal that included turkey, gravy, a box of sweetened cranberry juice and chocolate pudding which my sister advised me not to eat. After paying the $2,400 tab, I was instructed to make an appointment with an endocrinologist and sent home with a prescription for Metformin, daily aspirin and no dietary advice. My sister suggested buying a meter on the way home.

Seeing an endocrinologist was another eye opener. As soon as he walked into the room, without even looking at me or my meter which had 80 stored blood sugar readings, he said “you need insulin.” Then he did  a physical and said “you need to be hospitalized with an IV because you’re dehydrated; do you have medical insurance?” When I said no, he said “get some Pedialyte and Gatorade and drink six glasses of each per day.” I asked “don’t those drinks have sugar in them?” He said “not really.” He gave me a prescription for Januvia  ($400 for 100 tablets) and directed me to take two a day. He then handed me an 1800 calorie/day diet and disappeared.

Naturally, I was afraid to eat anything because I was afraid my blood sugar would climb. At my next visit, when I told him the medication was making me sick, he said “just keep taking it, the symptoms will subside when your body gets used to it.” He said my A1C was 8.9 percent. One week later, I found a different doctor, but he wasn’t interested in seeing me unless I paid him another $1,200 to repeat the physical and labs from two weeks ago eventhough I had a copy of my labs and he could consult with the other doctor. I was running out of money after spending $4,000 in two weeks.

While doing research on the internet, I came across Dr. Fuhrman’s website and ordered Eat To Live and  Eat For Health and started the program by following the recommendations in the section Advice for the Diabetic Patient. I  weighed  220  pounds on Jan.8th 2009, the same day I stopped taking all diabetes medication. Within  three months, I weighed 195 pounds. I had new blood work completed with a new doctor. She downloaded my blood sugar numbers from my meter and said “whatever you’re doing, keep doing it because it’s working."

I explained Eat To Live, my typical meals and snacks and told her I stopped taking medication on my own three months ago. She later phoned me with my lab results: A1C: 6.0 percent which she said was in a non-diabetic range.The improvement from 8.9 percent  to 6.0 percent in three months on Eat To Live was far better than I expected.

I am now 57 years old and weigh 188 pounds (I am 6ft. tall). I have even found it easy to  eat out, eventhough my diabetes class educators said “If you’re diabetic, it is impossible to eat right at restaurants so try to avoid eating out altogether.” My family took me out to our favorite Mexican restaurant for my birthday. I had grilled vegetarian fajitas with tofu and black beans. . I tested my blood sugar two hours later, expecting it to be around 180 because I overate. It was 124.

I have attended five diabetes “education classes' and am appalled that the certified diabetes educators constantly hand out suggested meals with eggs and toast or processed cereal and milk for breakfast, daily roast beef or turkey sandwiches for lunch and  more chicken or other meat at dinner, and limiting fruit to one to two day. They also teach that protein stabilizes blood sugar so it’s important to eat meat and dairy at each meal. After those dietary recommendations, one educator then spoke at great length about the evils of high cholesterol, high blood pressure and high blood sugar. Then she spent two hours talking about the various drugs available to treat them. I keep thinking if you are eating the right foods, why would you need drugs to protect yourself from the damage they cause.