The immune system is the body’s defense system against irritants, toxins, infections, and the development of cancer. With an arsenal of “soldiers,” such as T-cells, B-cells, antibodies, macrophages, etc., the immune system can detect, attack, and remove potential dangers to optimal health. A nutrient-dense eating style with a variety of immune supporting phytochemicals is required to maintain an effective immune system. 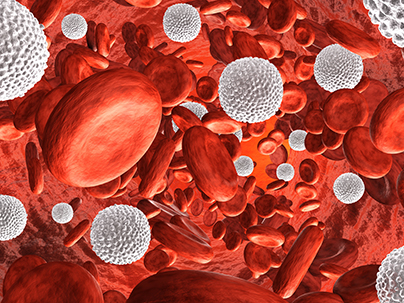 The goal of the immune system is to distinguish self from non-self. There are two main components to the immune system: the innate and the adaptive immune system. The innate immune system is made up of barriers in the form of skin and mucous membranes (of the mouth, nose, etc.) and chemical secreting cells that attract infection-fighting white blood cells. These cells kill foreign invaders by the process of “phagocytosis,” where the cell engulfs and destroys the invader. The adaptive immune system is made of B cells, which secrete antibodies against invaders, and T cells, which help destroy infected cells. These two systems work together to optimize health utilizing numerous chemical messengers, like interferon, interleukins, and the complement system. Dysfunction in one “soldier” can have dangerous systemic effects throughout the whole body.

Many factors can cause dysfunction in the body’s defense system, including nutritional, psychological, environmental, and hormonal factors. Nutrition has the largest impact on the immune system. The Standard American Diet with its low-nutrient, highly processed refined carbohydrates; trans, saturated, and processed fats; and large amounts of animal products sets the stage for an impaired immune system. An assortment of natural plant foods is needed to support optimal immune function. Nutrient deficiencies, excess sugar consumption, and food sensitivities can further depress the immune system.1 Negative emotional states (e.g. depression) and stressors (e.g. the loss of a spouse) were found to decrease the body’s ability to fight infection and may increase risk of allergies or autoimmune diseases.2 Sleep deprivation, alcohol abuse, and smoking also impair immunity.

Do you have a supplement formulated to specifically to enhance protection against cancer?

Dietary supplements by definition do not treat, prevent, or cure a disease and cannot claim to on labels or in advertising. However, plant extracts are continually being studied for their potential to maintain health and affect the disease process.  Clinical trials are being conducted, aiming to figure out whether certain plant extracts could affect cancer-related biomarkers, act as beneficial adjunct treatments to be used with chemotherapy, or help to prevent progression of an early stage cancer or pre-cancerous condition. Read more

Are there any good foods/supplements/herbs that will lighten the symptoms or shorten the duration of a cold once its symptoms present and the ‘normal process’ begins?

There is considerable science to suspect that if an herbal product could relieve cold symptoms, then it should be avoided due to toxicity. You can’t have it both ways; if it works, it has pharmacologic properties and that means it is toxic, and if it is not toxic, it cannot work. The symptoms of the cold are the remedy, they occur to remove and defend against the viral attack. Excellent nutrition gives us better immunity, which means your defenses are heightened and your ability to respond to illness is quicker and more complete. If you are eating and supplementing properly when well, you are already at maximum function. If you could take something to improve immune function, it should be used regularly, not just when sick because once you are sick, you can’t suddenly get great nutrition, that only occurs from months of eating properly.

Recently, my immune system seems to be very weak. I have had various infections over the last three months. My diet is 80% Nutritarian (plus fish oil and vitamin D every day). I have to admit that I am not too physically active, and I love sweets; I have dessert almost every other day.

Is there anything specific I can do to boost my immune function?

You probably know what I’m going to say – if you’re having SAD desserts with sugar, trans fats, and high fructose corn syrup or other sweeteners, this really will impact your immune function over time. When you can make a commitment to 90-100 percent Nutritarian diet, you’ll see that the frequency of infections will diminish tremendously. I highly recommend that you read Super Immunity. Try some of my delicious healthy desert recipes that are helpful to break your addiction to overly sweetened conventional deserts. Plus, maybe you are one of those people who require more zinc, and maybe you need more B12 too. It might be helpful to take my multivitamin to fill in these deficiencies in your diet.

Dr. Fuhrman’s 20-day program will help you take immediate action to protect yourself from infection by achieving superior health and strengthening your immune defenses. Read More

Your best armor to fight diseases of every nature, from heart disease, cancer and viruses comes from what you put in your mouth. Read More

Why do some of us get sick more than others? Dr. Fuhrman explains how proper nutrition is the key to fending off illness, from common colds to cancer. Read More

Dr. Fuhrman’s 20-day program will help you take immediate action to protect yourself from infection by achieving superior health and strengthening your immune defenses. Read More

G-BOMBS: The anti-cancer foods that should be in your diet right now

Looking for the biggest bang for your caloric buck? Remember the acronym G-BOMBS, which stands for Greens, Beans, Onions, Mushrooms, Berries and Seeds. These foods fue... Read More

Do you know what sparks a cytokine storm, and how it can wreak havoc on your health?   A cytokine storm occurs when the body’s attempt to fight off an in... Read More

Why beans? Beans, lentils, and split peas are rich in fiber, resistant starch, and plant protein, and they are a low-glycemic carbohydrate source. The health benefi... Read More

The best medicine for seasonal allergies may not be medicine. Instead, healthy eating and a healthy lifestyle go a long way in lessening symptoms.   A study ... Read More

Fasting under medical supervision can have amazing healing results. The concept of therapeutic fasting is not new; the early great philosophers, thinkers, and healers ... Read More

During Cold & Flu Season, Protect Yourself by Eating Right

Colds and flus are a large burden on our society. Between treatments, illness-compromised productivity, and lost workdays, it is estimated that the common cold alone c... Read More

Dr. Fuhrman discusses the immune enhancing effects of mushrooms, and some other interesting aspects Read More

Dr. Benson distills the latest research and how a moderate amount of the right type of chocolate can be a beneficial part of a healthful diet Read More

Supplements: Which ones are right for you?

Dr. Fuhrman gives an in-depth overview of how to maximize the benefits of supplementation Read More

Along with AIDS Roger had multiple health problems, now his immune system improved beyond what he thought possible, he feels good and lost 65 pounds... Read More