Crohn’s disease is a chronic inflammatory disease in the family of inflammatory bowel diseases (IBD) that can affect any part of the gastrointestinal tract from the mouth to the anus but most commonly involves the intestines. 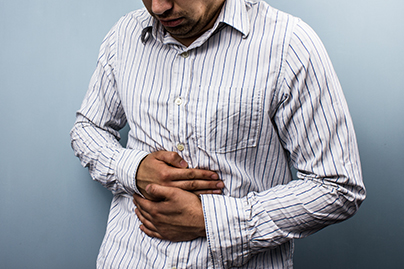 Crohn’s disease is a disease that is most common in Westernized areas, such as North America, Australia, and Europe, but is also spreading to developing countries as Western lifestyles, such as poor dietary habits, creep in. In the U.S. alone, it is estimated that the prevalence may be approximately 0.2%,1 and this number is getting higher over time.

Some of the potential explanations of this geographical trend include Westernized factors, such as antibiotic use, hygiene, exposures to certain infections, pollution, and diet. A higher risk follows those with a family history of the disease as well. Intestinal permeability (leaky gut) and altered intestinal bacteria seem to play an important role, but it is still not known exactly what causes Crohn’s disease.

Those with Crohn’s disease may experience some or all of the following symptoms:

For those with Crohn’s disease, improvements in nutrition, lower inflammation, and intestinal bacterial balance can occur with nutritional excellence.

I noticed that the newsletter on inflammatory bowel disease doesn’t mention beans or nuts and seeds (except for walnuts in phase 1). Are they generally introduced at some point?

I was diagnosed with Crohn’s and am following the Eat to Live 6-week plan. I am eating lots of beans, nuts and seeds, fruit, and raw vegetables. I’m not having any adverse reactions, and my symptoms have disappeared, although they were fairly mild to begin with.

They are not excluded, but nuts/seeds should be soaked and chewed very well or blended, and beans should be eaten in small amounts (well chewed) only and then increased gradually as tolerated. There is no problem with them unless people are having problems with them.

My son was recently diagnosed with Crohn’s disease. I am trying to determine the proper diet for him. Based on the reading I’ve done, it seems he should stay away from fresh veggies, fruit, seeds, nuts, etc., however, your books seem to say that this is exactly what he needs for good health. At what point should he start to eat the right foods instead of a simple carb diet that most recommend?

First, read my newsletter on inflammatory bowel disease where I discuss a patient’s diet with active Crohn’s or colitis.

I think the diets prescribed by conventional medicine are medieval. He should never be on a simple carb diet.

He should not avoid vegetables or seeds/nuts, however, they should be steamed/soaked and pureed.

He should be started on high dose EPA and VSL#3 too.

I have Crohn’s disease. My doctor recommended animal protein to deal with low albumin. How do you feel about this? Is there a specific protocol I should be following for my condition?

Crohn’s disease is a common cause of low albumin. The protocol I use involves VSL#3, high dose fish oil, both juicing and blending, and, of course, avoidance of all oil and animal fats. No protocol can be precisely right for every person, but you can find a newsletter in the member center here that contains the general autoimmune protocol and one that contains my protocol for inflammatory bowel disease. Your albumin will rise as your inflammation decreases and the problem is in better control. In the meantime, to help improve it, also add ground hemp seeds, sunflower seeds, Mediterranean pine nuts, and one cooked egg white daily to your meals.

Ulcerative colitis and Crohn’s disease are the two primary inflammatory bowel diseases (IBDs). IBDs occur as a result of an autoimmune attack on the digestive tr... Read More