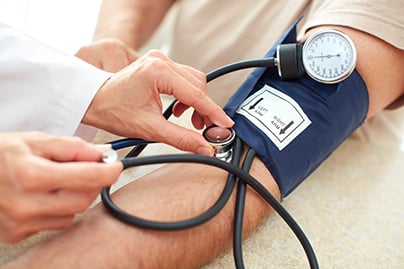 High blood pressure is one of the most common diseases affecting the world today. In the U.S., it is estimated that approximately one third of adults have hypertension1 and another one third who have pre-hypertension. In response to this, many are given medications to help control their blood pressure, which has led to approximately 70% of adults age 65 or older in the U.S. to be taking one or more of these medications.1

High blood pressure is a concern because it not only can be directly harmful on organs such as our heart and kidneys but also is often a sign of an underlying process affecting the arteries (atherosclerosis) and is associated with a higher risk of getting a heart attack or a stroke. Hypertension is often called “the silent killer” because, most typically, there are no symptoms noticed, but sometimes, very high blood pressure can cause dizziness or headaches.

Uncommon but significant causes of high blood pressure include problems such as kidney failure, heart failure, liver failure, sleep apnea, insomnia, and anemia. The most common category of high blood pressure, however, is called “essential hypertension,” which basically means that it is related to a high sodium/salt diet, being overweight, being sedentary, and having unhealthy arteries. Atherosclerosis, or hardening of the arteries, typically advances with aging, and high blood pressure may be the only sign that this is developing. This means that most persons who have high blood pressure will see dramatic improvements in their health if they diligently modify their lifestyle, particularly their diet, to improve and even resolve high blood pressure as well as reduce the burden of atherosclerosis to lower their risk of a heart attack, premature disability, and death without resorting to medications.

Daily activity and all forms of exercise, particularly aerobic interval exercising,5 pushes the blood pressure down effectively. The more frequently one exercises, the more effective it is.

If you are overweight, a Nutritarian diet style will help you reach your ideal weight, and losing weight will also lower blood pressure. As you make efforts to reach the dietary and exercise goals, you will not only be lowering your blood pressure, but also reducing your risk of heart disease, stroke, dementia, and cancer simultaneously.

The Dr. Fuhrman Wellness Center in New Jersey
We specialize in the reversal and prevention of disease using nutritional methods instead of medication. Lose weight, regain your health and overcome food addiction. LEARN MORE

* Foods containing at least 0.4 grams per serving of plant sterols, taken twice a day with meals for a daily total intake of at least 0.8 grams, as part of a diet low in saturated fat and cholesterol, may reduce the risk of heart disease. LDL Biotect provides 0.54 grams of plant sterols in each two-capsule serving.

The reason why it is taking longer to normalize now is that every time you lose weight and gain it back, allowing your weight to yo-yo, you increase the amount of saturated fat and visceral fat percentage, worsening the underlying pathology that then takes longer to resolve the next time.

It’s not uncommon for your blood pressure to fluctuate like this as you move toward your optimal weight. Don’t be discouraged, I am sure it will continue to improve. Be careful as you progress, and speak to your doctor about continuing to monitor and lower your blood pressure medication. If you continue to feel dizzy and have readings of 110/70 or less you could hurt yourself in a fall and also damage your kidneys. Reducing stress, exercising, and optimizing your vitamin D level can all help to normalize your blood pressure.

I am perplexed by the passage in "Super Immunity" (page 43) that states lower blood pressure in the elderly is below 140/70 and leads to increased mortality. I am 54 years old and have been eating a Nutritarian diet for almost two years. I’ve managed to wean myself off BP meds and have readings between 140/82 to 115/65 (130/75 average) depending on time of day and my stress levels. My goal has always been to get more consistent readings in the lower range but am now wondering if that is unhealthy. What is an ideal blood pressure reading for me?

I am 45 years old and 5’4". I weigh 122 lbs. I don’t take any meds (just Dr. Fuhrman’s Women’s Daily Vitamin and Immunotect). I just had blood work, and numbers are good (normal ranges). I exercise about 4-5 times per week, I am not a smoker. I have 4-5 alcoholic beverages per week, otherwise I drink water. Here’s my problem - hypertension!! I have been keeping track of my blood pressure, and the last 3 day's readings are 148/97, 158/88, 153/89. I follow Dr. Fuhrman’s eating plan most of the time – having 1-2 cheat meals per week. I don’t eat very much salt (under 1500mg/day) and only have processed food (potato chips/cookies) about 1-2 days per week with my cheat meals. Please help – I don’t want to have hypertension, I know it is very, very dangerous.

These processed foods are inflaming your body and making your arterial walls less elastic. Spend some time reading here and listening to some of the teleconferences so that you more fully understand the impact of nutrient rich foods for cardiovascular health. You likely need to be more aggressive avoiding added salt. I think you should commit 100% to the Nutritarian diet and re-evaluate in 6-8 weeks. Alcoholic beverages consumed regularly are a major risk for breast cancer. I strongly suggest you re-consider that practice as well.

Interval training is the type of exercise that is most effective. It would be great if you can do 2-3, 3-5 minute intervals a day. Why don’t you do a scientific experiment, just for the next 15 days? You can do it for 15 days I am sure. That means no added salt to your diet at all, including no Swiss chard, NO alcohol, and no flour or bread products. In other words, 100 percent whole, natural foods and a large salad to start both lunch and dinner. You will drop some weight, have better exercise tolerance, and lower your blood pressure. You will be amazed what 15 days can do.

What does it mean if your blood pressure readings are at 140 over 70, where the top number is high and the bottom number is in the low range?

It usually means the blood vessels are getting stiffer with aging and is not a favorable sign. It is important not to compromise with diet and exercise and do everything possible to bring the top number back toward normal, including interval training and a Nutritarian diet. The difference between both numbers is called pulse pressure, and generally a lower number is better. One problem with medications to lower blood pressure is that they lower the bottom number (diastolic) while lowering the top number (systolic), and a diastolic pressure that is too low can interfere with perfusion of the coronary arteries and increase risk of death. A Nutritarian diet is extremely effective at normalizing pulse pressure, something drugs cannot do.

This book integrates the age-old practice of fasting with medical research to explain how fasting can relieve and even cure many illnesses. Read More

How to Lower Blood Pressure and Cholesterol

This streaming video series delivers the most effective ways to lower your blood pressure and cholesterol and protect against heart attacks and strokes. Read More

The DASH diet vs. The Nutritarian Diet

With your heart at stake and your life on the line, it is imperative to know what diet program is the best. U.S. News & World Report evaluated 38 popular diet plan... Read More

Did you know you should go nuts over nuts and their little partners, seeds? Although they are often overlooked as important health foods, nuts and seeds are mighty war... Read More

Berries are one of my super foods, and are represented by the second “B” in G-BOMBS. Rich in fiber and phytochemicals and low in calories, they have the hi... Read More

Native to North America, blueberries have been part of the human diet for more than 13,000 years, long before they were formally recognized for their healthy and anti-... Read More

4 Strategies to Reduce Risk of Dementia

Keeping your blood pressure in the favorable range is an important step toward maintaining your brain function as you age. The small arteries of the brain are sensitiv... Read More

The most effective natural ways to lower your blood pressure and cholesterol and protect against heart attacks and strokes. Read More

How to Lower Blood Pressure and Cholesterol, Part 3: Nutritarian Cooking for Reversing Disease

How to Lower Blood Pressure and Cholesterol, Part 4: Questions and Answers

How to Get Off Blood Pressure Meds

Dr. Benson discusses blood pressure medicines and how to work with your doctor while following the Nutritarian lifestyle Read More

Looking to extend your life and lower your risk of heart attack, stroke and diabetes? Dr. Fuhrman explains. Read More

Fundamental Principles of the Nutritarian Diet