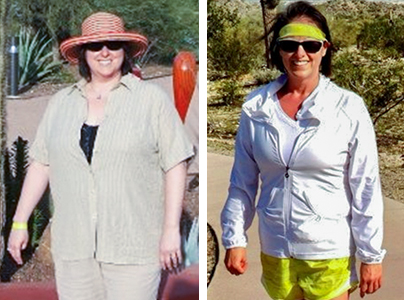 Laura didn't want to die young and lost 88 pounds, reversed her diabetes and depression, now feels better than ever

Do you want to die young?  That was the question I asked myself a little over two years ago.  So, after a lifetime of yo-yo dieting, I finally decided to give Dr. Fuhrman’s plan a try.

At forty-three years old, I had five years of experience with type 2 diabetes, high cholesterol, and sleep apnea.  In addition, I have a repeated history of depression.  I felt defeated and really had given up hope of feeling good again. I was settling into “old age” and accepted that I was going to be morbidly obese, weighing 252 plus pounds for the remainder of my life.  After all, “it was in my genes” and I had always been overweight.  But I had not totally given up.   I was a daily two-mile walker for the past 23 years and practiced yoga on a regular basis.  I faithfully worked with my doctors, specialists and dietitian to keep my diseases managed in an appropriate manner.  I was on four different medications and slept with a CPAP machine to help assist with my sleep apnea.

While eating my dietitian approved diabetes snack of cheese and whole wheat crackers I watched, with eager excitement, Dr. Fuhrman on TV explaining that type 2 diabetes could be completely reversed.  Honestly, this was news to me. I ordered Eat To Live, which became my bible, along with his DVDs. I watched, studied and changed.  After detoxing from my “healthy diabetes diet,” I never looked back.  I followed Dr. Fuhrman’s principles in Eat To Live.  And, within a few weeks, the weight just began to fall off of me.  I was amazed.  I had spent the last five years between 245 to 255 pounds.

As my weight continued to drop, my level of energy skyrocketed.  I did not have a trace of depression.  No longer did I wake in a fog, feel sick to my stomach or have a feeling of despair.  I was alive and happy.  After about six months, I was feeling so good that I decided to join a gym and start running.  I always hated running and criticized people who ran thinking that it is bad for them, they will ruin their bodies. Hmm, what I needed to do was look in the mirror and realize that I was ruining my body by eating an American diet and getting minimal exercise.

After a few months I reversed my type 2 diabetes, high cholesterol and depression. My cholesterol was lower following the Eat To Live program than it had been on 40mg of a popular statin drug. I have the blood work results to prove this fact. And, finally after about 18 months, I was able to reverse my sleep apnea.

Today, at forty-five years old, I feel better than I did in my twenties.  My energy is sky high as I continue to eat well and exercise.  I ran my first half-Marathon in October 2013.  I loved it and will definitely run more races. I am forever and deeply grateful to Dr. Fuhrman for sharing his knowledge.  He truly saved my life.  In my opinion, he is a true hero.  Thank you.

Lorri easily lost 50 pounds, her skin  cleared up, and she has much more energy despite her history with chronic depression... Read More

Brandy lost 18 pounds and won her five year battle with depression, no longer has acne, and is happier and more energetic than ever before... Read More

Fearing for his life, Daniel lost an amazing 152 pounds and his whole life has drastically changed for the better... Read More

Upon seeing the beneficial effects of the Nutritarian diet on her dad's health, 24-year-old Marjorie set on the same path, lost 60 pounds; it is now her forever lifestyle... Read More

Lizzie lost 50 pounds and is very grateful to be free of depression and suicidal thoughts she has had since childhood... Read More

After giving birth, Emily followed a plant-based diet and lost 43 pounds pregnancy gain; now both baby and mom are continuing to thrive on her healthy diet... Read More