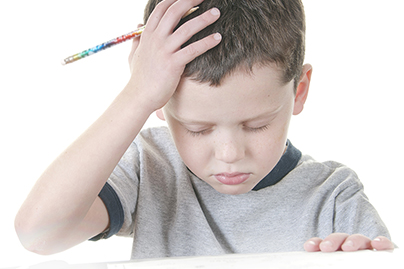 It is natural and normal to occasionally have symptoms of inattention, especially in children, but when it interferes with development, then it becomes abnormal. The following signs may be noticed in someone with ADHD:

There is little known about the cause of ADHD. There is clearly a familial risk pattern associated with ADHD, but there may be environmental influences that could be modified to lower the risk of or the severity of this condition. Some evidence suggests that toxin exposures or allergic reactions in utero or as a young child may be contributing to a person’s risk, whereas other observations indicate perhaps nutritional deficiencies related to brain health such as iron, zinc, omega-3 fatty acids, folate, and other phytonutrients may play a role. A Western diet low in these and many other nutrients and high in dairy, processed and red meats, salt, and refined sugar has been associated with higher risk of ADHD.2

My son was diagnosed with ADHD about two years ago and was put on Ritalin and more recently Adderall. I recently told his doctor that I want to take him off the meds completely. The doctor was surprisingly supportive. He said to look into the Feingold Diet. Are you familiar with this Program? What would you suggest?

This diet has been tested in numerous studies with variable results and is not very effective. This food-additive-free diet is a start, and our children should not consume dyes and chemicals in their food, but eliminating them is not enough. Optimal brain function requires more than just removing food additives and food coloring in processed foods when the diet remains poor and deficient in essential nutrients and essential fatty acids necessary for normal brain function. What studies have shown to be highly effective is a high-nutrient diet, removal of processed foods, and supplementation with omega-3 fatty acids.

My daughter is 10 and was diagnosed with ADHD. We opted not to treat her with meds. We have been giving her a product which contains 100 mg of DMAE and fish oil. Is this safe? We have been working toward changing her diet. I have noticed that red dyes and processed foods are the worst for her, especially sugar. How much DHA would she need in addition to your multi?

I wouldn’t use the product with DMAE in it, as the research isn’t convincing, and we don’t have enough safety information on it. Test her on a sort of elimination diet if you haven’t done so, by eliminating all processed foods and additives in general, including sugar and white flour, as well as no dairy or gluten (wheat, barley, rye). Keep working on improving her diet to involve more vegetables and see how she does. She needs to eat nuts, seeds, greens, mushrooms, and fruit daily. Don’t forget that pesticides have been associated with many cases of ADHD, so organic is best. Read this article for supplementation information.

The entire family has to make a radical dietary change in these cases and not just eliminate some of the marginal foods. You really have to go for nutritional excellence as a total

Understand how to get the pickiest eater to love healthy food and find out the many positive social, physical and mental benefits of a superior diet. Read More

The long-chain omega-3 fatty acids DHA and EPA are associated with many aspects of brain health. I recommend supplementing with these beneficial fats, since most moder... Read More

A Nutritional Approach to ADHD

Dr. Fuhrman provides an in-depth overview of the latest nutritional science regarding the development of ADHD and helpful management strategies including links to recipes Read More