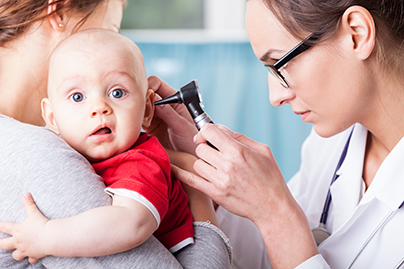 Ear infections are the most common cause of office visits and most common reason for prescribing antibiotics. Ear infections can be caused by bacteria, but a majority of cases are caused by viruses. They often occur after a viral upper respiratory infection where congestion and Eustachian tube dysfunction lead to the build-up of pressure and fluid behind the ear drum. These infections are often erroneously treated with antibiotics, which promote bacterial resistance, disruption of beneficial gut bacteria, increased risk of future infections, and other adverse drug affects.

Symptoms of a middle ear infection include ear pain, fever, ear drainage, and temporary hearing loss. Infants and young children may present with irritability, nausea, vomiting, lack of appetite, ear pulling, and decreased activity. One-third of children with recurrent ear infections develop chronic congestion with fluid in the middle ear leading to hearing loss and potential treatment with tubes. Symptoms of an outer ear infection include itchy, red, swollen ear; ear drainage; and pain with movement of the ear.

Risk factors for ear infections include family history, exposure to tobacco smoke and air pollution, poor nutrition, lack of breastfeeding, infants drinking from a bottle while lying on their backs, frequent antibiotic use, poor socioeconomic conditions, pacifier use, and use of daycare. Studies have shown that breastfeeding exclusively for six months has decreased the rates of otitis media among infants.1 Poor nutrition, especially a diet that lacks green vegetables and is made up of nutrient-deficient processed foods and animal products, sets the stage for decreased immunity and increased risk of infection.

Exclusive breast-feeding for six months and then continuing breastfeeding for 18-24 months along with a nutrient dense diet is the best protection against ear infections.

Judicious use of antibiotics

I just took my daughter to the doctor and he told me that she has an ear infection. He said her eardrum was pink. Do you think this was an accurate diagnosis?

The doctor sticking his scope in your daughter’s ear and seeing a pink eardrum when the child is sick does not mean a bacterial ear infection is present. If they do not do a tympanogram (a tool that measures fluid levels in the ear), the exam is not accurate. Most doctors have the tympanogram in their office, and they may skip it to simplify and shorten the visit if they think that their exam was good enough. I would ask for one. Remember, most ear infections are mostly viral and do not require treatment. They will clear on their own.

My son is 21 months. He is throwing up and has a fever. My husband took him to the doctor and was told he has an ear infection. She prescribed Amoxicillin. We have never given him antibiotics before, and I have read in your books that antibiotics are overprescribed and start a vicious cycle of ear infections, etc. What should we do? The baby is hardly eating anything. Is it ok for a baby to not eat for a couple of days (except for small amounts of almond milk, water, vegetable broth, apples, bananas) without causing a problem? How high can we let the baby’s fever run and for how long before giving him some Tylenol to bring it down?

It is reasonable to follow his fever over the next few days and see if he is improving without the antibiotic. It is okay to have a decreased food input for a few days, as long as enough fluid is consumed. You should never give him Tylenol to bring it down. The only reason to use a medication on a child is if his pain and discomfort is so severe that he cannot sleep at night (acetaminophen is not the appropriate medication). Following the fever will help decide if he is improving or not.

My son (2.5 years) has what will be his third ear infection in a year and could be his fifth time on antibiotics in a year. The doctor told us it is red in the one ear, and it will not go away without antibiotics. He knows our concerns putting him on the drugs. Is there anything we can do before it becomes a full blown infection? Should we wait it out, and if so, for how long?

Taking antibiotics over and over is responsible for increased likelihood of more ear infections in the future. As I described in my book, Disease Proof Your Child, it is the treatment of early life ear infections with antibiotics that increase the risk of serious bacterial otitis media in children.

So, the answer to your question is to have your child eat perfectly, not good, but perfectly. Try to avoid antibiotics as much as possible and only if the infection is severe and has a persistent high fever. Recovery can be achieved with superior nutrition in the vast majority of cases. It sounds like your well-meaning physician is not following the new guidelines of the American Academy of Pediatrics. That means if he does not have a persistent high fever for a few days or persistent pain, you should hold off on treatment.