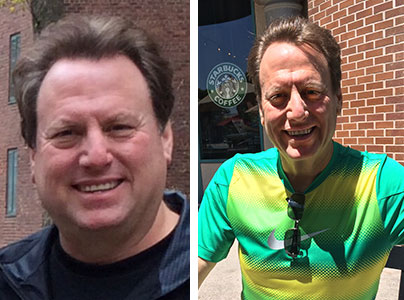 After a heart attack, quadruple cardiac bypass, taking medications for nine years, Barry lost 50 pounds, is off but one med, feels fantastic

In 2005, at age 48, I was overweight, ate the Standard American Diet and did very little real exercise. I started to experience fatigue and was uncomfortable much of the time. My doctor had me on five different medications for high blood pressure and cholesterol. Ultimately, on September 28, 2005, I was awakened at 4 A.M. with severe tightness in my chest and profuse sweating. I was having a heart attack.The next day I had quadruple cardiac bypass surgery for the severely blocked arteries that were discovered by angiogram. For the next nine years, I continued to take all the medications, and tried a diet here and there to lose weight. All failed.

Then in December 2014, I accidentally stumbled on Dr. Fuhrman's PBS special. I was drawn in by the absolute logic of Dr. Fuhrman's findings and recommendations. I bought several of his books, including Eat To Live, which I still use as my nutrition bible. I read the books, watched many of Dr. Fuhrman's DVDs and on February 15, 2015 I began my new Nutritarian lifestyle.

Finally, I had a strategy to not only lose weight, but gain true health. In just four months, I lost 50 pounds, settling in at a perfect 165 pounds. I am 6' tall. The weight has remained off ever since. I feel fantastic, have rediscovered "pep in my step," and work out at a gym at least four times every week.  I am now on just one medication and the dosage has been reduced even on that one.

Everyone that knows me has commented on the dramatic change, and they all know about "the great Dr. Fuhrman." Several friends and acquaintances have since come aboard and are now following the Nutritarian plan as well.  I am a firm believer that Dr. Fuhrman's nutritional information, based on scientific studies, should be taught in every school in America, starting in elementary school. It is the only way that we might have a chance of obliterating the massive obesity problem that plagues this great nation of ours.