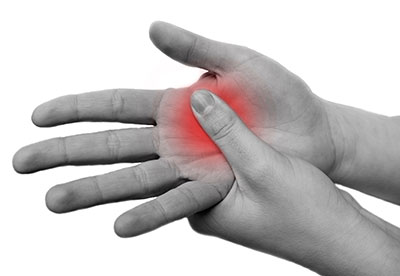 Major improvement of rheumatoid arthritis symptoms, even recovery, is often possible with customized nutritional changes and supplements, and in some severe cases fasting, despite traditional treatment which pays little attention to this non-toxic mode of treatment.

Arthritis sufferers spend more than $1 billion annually on drug treatments. One million new cases are diagnosed every year, and the number is growing. Drugs and surgery are the standard treatments offered by the medical profession without attention to cause or nutrition. The Arthritis Foundation declares in their literature that there is no special diet for rheumatoid arthritis, but that foods rich in antioxidants can help to control and reduce inflammation.1

Rheumatoid arthritis is an autoimmune disease that usually occurs in symmetrical parts of the body, such as hands, wrists, knees and feet. Morning stiffness, especially in the hands, is a hallmark of rheumatoid arthritis. The disease is diagnosed from these typical symptoms and by blood tests that demonstrate inflammation in the body.

It is not entirely understood why autoimmune diseases develop. A combination of factors such as bacterial overgrowth in the digestive tract, increased gut permeability (the ease in which molecules can pass into the intestines), immune system hyper-reactivity and retention of toxins that stimulate the immune response all play a role. The immune system, in an attempt to remove foreign or toxic substances, mistakenly attacks its own cells and, as a result, inflames the joints, causing arthritis pain. The term “autoimmune disease” was coined to reflect these bodily misinterpretations.

The traditional treatment of rheumatoid arthritis revolves around medications which typically include steroids and chemotherapeutic agents such as methotrexate, Imuran®, Gold®, Plaquenil®, Arava® and Remicade®. These medications are considerably toxic and can result in serious disability.

My approach to treating rheumatoid arthritis differs in that it incorporates dietary modifications and nutritional supplements, avoiding the use of toxic drugs in the vast majority of cases. The recommendations are customized to the needs and response of each patient to treatment and involve more than just putting them on a special diet. However, in most cases, dramatic improvements and even complete recoveries occur.

In spite of well-conducted scientific investigations and the clinical experience of many physicians, this effective nutritional treatment of autoimmune disease is generally ignored. I have seen scores of patients with rheumatoid arthritis as well as lupus, fibromyalgia and connective tissue disease obtain complete recoveries through these natural interventions. Also, I have many patients who have made complete recoveries from allergies and asthma. Not every patient obtains a complete remission, but the majority is able to avoid the use of medication.

The Dietary Equation to Good Health

The key to treating autoimmune illnesses is to follow the H = N/C formula. Only then can the immune system begin to normalize its haywire circuitry. H = N/C means Health is proportional to the Nutrient per Calorie density of your diet. This formula is always considered in my nutritional recommendations and forms the foundation of my nutritional medicine practice. Research confirms the effectiveness of this approach for rheumatoid arthritis.

Since we are primates, best designed for a plant-predominant diet, many people have a limited capacity to digest animal proteins efficiently. When we eat a diet rich in animal protein, our ability to efficiently cleave all the amino acid bonds may be limited. All the protein may not be totally broken down into its amino acid building blocks.

There is evidence that when animal peptides (pieces of partially broken-down proteins) are absorbed, they can lead to the formation of antibodies against themselves. Our immune system will not only attack these foreign proteins, but it can also cross-react, attacking human proteins in the body that resemble the amino acid sequences found on dietary animal proteins.

In other words, because animal proteins closely resemble the amino acid sequences of human body proteins, our own reaction (antibodies) against inadequately broken down proteins (peptides) can also attack our own tissues.

Plant proteins are less likely to cause this reaction, even if their peptides pass into the bloodstream, because they bear little resemblance to human proteins. Because we cannot efficiently dissolve animal proteins in the digestive tract and, frequently, consumption exceeds the digestive capacity, more incompletely digested peptides are apt to be absorbed. These peptides also result in the stimulation of unhealthy bacterial flora and the absorption of toxic bacterial by-products, which can create an inflammatory environment and, hence, immune dysfunction.

When patients with rheumatoid arthritis adopt a diet that is lower in animal protein and higher in vegetable protein, they typically feel better. Certain foods such as wheat and citrus fruit, as well as others, can also occasionally be problematic.

Working with dietary modifications that target the individual’s unique sensitivities, in conjunction with the judicious use of nutritional supplements that are helpful, and an occasional fast, the recommendations can be modified to help even the patient with a more severe case of rheumatoid arthritis. Of course, the biggest likelihood of complete remission and recovery is in the earlier stages or milder cases of the disease.

Systematic reviews of available scientific reports on dietary interventions for rheumatoid arthritis concluded that fasting, followed by a vegetarian diet, is useful in the treatment of rheumatoid arthritis.2, 3 Not all patients need to fast to resolve their symptoms, but it is helpful for some. For many, dietary modifications and the judicious use of appropriate nutritional supplements can eliminate pain and induce a remission.

My experience of monitoring over 500 fasts in a variety of clinical conditions has allowed me to observe that fasting, followed by a vegan diet, can offer both reduction in pain and lower inflammatory markers in patients with autoimmune illnesses. In addition, if the fasting period is extended long enough, a substantial number of patients actually experience total remission of autoimmune symptoms that do not return with re-feeding in about half the time. A series of my illustrative cases, were published in the medical journal Alternative Therapies.4

Late in 1992, I was diagnosed with rheumatoid arthritis. My rheumatologist prescribed non-steroidal anti-inflammatory drugs, and when my condition worsened he recommended Methotrexate®. After reading the dangerous side effects of this and other potent drugs being used for rheumatoid arthritis, I began looking for other options. I was lucky enough to hear about Dr. Fuhrman, and in March of 1993, I began his Arthritis Reversal Diet. I started to improve immediately and gradually stopped taking NSAIDs. I have switched to his recommended nutritional supplements instead.

Now, I have no stiffness or pain, and my sedimentation rate, an indicator of inflammation, has gone from the 50’s to 11. I have progressed from being barely able to climb stairs to working out regularly at a gym, and I don’t have to worry about the side effects of drugs that can be worse than the disease itself. I am very grateful to Dr. Fuhrman and his staff for their patience and their professionalism. They have helped me back to health on the ’Road Less Traveled.’” —M. McColgan

Two years ago, I started getting a lot of pain in my right wrist, and no one knew why. I had been to eight doctors, and I thought that there was no hope for me until I found Dr. Fuhrman. I had been on heavy medication such as Methotrexate®, Oraval®, Voltarin® and others. I had an MRI, many X-rays and a bone scan to try to find out what was wrong. I was given the diagnosis of psoriatic arthritis. Each drug had a different side effect, and even with all of this going on, I still wasn’t getting better. In just a few short months, Dr. Fuhrman not only eliminated the pain in my wrist, but my blood pressure went down. Furthermore, I lost 60 pounds and have remained healthy. I would like to thank you from the bottom of my heart for helping me. I have kept the weight and pain away. I feel great and owe it all to you! I can’t thank you enough.” —M. Graciano

I have cared for hundreds of patients with rheumatoid arthritis, connective tissue disease, systemic lupus, fibromyalgia and other painful disorders. The vast majority of all these patients have been able to achieve complete remission or significant reduction in pain and need for medications. The majority of patients did not need to fast, but the most stubborn cases have found that periodic fasting was helpful for achieving long-term remission. For those interested in a complete primer on this approach to treating autoimmune diseases please read my book, Super Immunity.