Lyme disease is an infection caused by the bacteria Borrelia burgdorferi which is transmitted by the deer tick Ixodes. It is the most commonly reported tick-borne disease in the U.S. 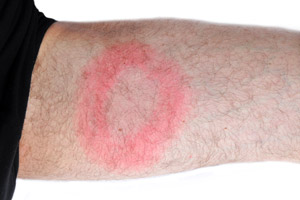 From 1992-2006, approximately 240,000 cases of Lyme disease were reported to the Center for Disease Control and Prevention, occurring mostly in the Northeast, but can occur in the northern Midwest and West coast.1 Most cases occur between April and October. People of all ages may be affected, but the highest incidence is among children ages 5 to 9 and adults 45 to 54 years of age.

Patients may or may not develop the characteristic 5 cm bull’s eye rash (known as erythema migrans) at the site of the tick bite. Fever, headache, muscles aches, joint pains, and fatigue may also be experienced. If untreated, Lyme disease may progress to cause facial palsy, inflammation of the heart (carditis), inflammation of the brain (encephalitis) or recurrent arthritis.

Every case of true Lyme disease should be treated with antibiotics immediately when first diagnosed. Many patients are often mistakenly diagnosed with Lyme disease (especially with chronic Lyme disease) by physicians when they do not have Lyme disease and treated with antibiotics inappropriately. Autoimmune disease and viral illness, such as Epstein Barr virus, can produce bands looking like Lyme disease, and fatigue and diffuse joint pain can be symptoms of inadequate nutrition and is often misdiagnosed as Lyme. Antibiotics have anti-inflammatory effects that can reduce pain as well as lower bacterial counts in the gut, reducing bacterial toxins, and lessening symptoms due to bacterial overgrowth. With reduction of symptoms, the patient believes that he/she had Lyme disease and was treated appropriately. If symptoms reoccur with the cessation of antibiotics, patients are led to believe that they need longer courses of antibiotics. Taking antibiotics long term has dangerous consequences, such as killing beneficial gut bacteria, interfering with vitamin absorption, yeast overgrowth, severe allergic reactions, and resistance to antibiotics; but the main issue is increased cancer risk from antibiotics in the future. Occasionally, people may still feel poorly after being adequately treated for Lyme. They do not need more antibiotics, rather, they need to get healthier and detoxify from the antibiotics they took and the killed spirochetes that have to be dealt with. Long-term adherence to a nutritarian diet can maximize the body’s self-healing potential and can help Lyme disease sufferers to recover quicker and more completely.

The bull’s eye rash may develop 1 to 2 weeks after the tick bite, at which time it may be too early for blood tests to be positive for antibodies. An initial ELISA test that is positive needs to be corroborated by a Western blot test. Beware of the false diagnosis of chronic Lyme disease. There are many small laboratories used by Lyme disease promoting doctors with Lyme disease assays that over-diagnose the disease, and who routinely treat people long-term who no longer have Lyme, but who have become iatrogenic antibiotic addicts.

Ticks are new in my area (Quebec Canada), and three people have been officially diagnosed with Lyme disease so far in my village. I do not doubt it is a real, existing, complex disease, but it probably is over-diagnosed and especially "over-worried".

Is there any definite test to tell if one actually has Lyme disease? Besides the obvious (clothing, checking for bites and rashes), are there any specific strategies to protect oneself preventively? If one has Lyme disease would antibiotic therapy still be recommended if you follow a Nutritarian diet?

If you really contact Lyme from a tick that has been in contact for 36 hours or more, and develop the typical ECM rash too, then you do not need a blood test and do need to treat it with antibiotics. Lyme diagnosed with a constellation of symptoms and strong, confirmatory blood work certainly needs antibiotics, but what I see very often here in Lyme country is people who do not have Lyme, or who once had it and it was adequately treated, being prescribed antibiotics for symptoms that are not Lyme and with blood tests that are positive from a disreputable lab (while negative from standard labs). These individuals are then kept on these very toxic drugs for months and sometimes years. Antibiotics and other toxic medications can suppress symptoms and have anti-inflammatory effects making a person feel better while taking them, but feeling better on antibiotic does not mean Lyme is present.

I have battled with ongoing ailments the last few months including sore joints and muscles, achy neck, headaches, and eye pain.

Blood work showed positive results for Lyme Disease- Interp (IGM) and reactive for 23 KD (IGM) Band and 41 KD (IGM) Band. My bilirubin also measured high at 1.9mg/Dl. My doctor wants to send me to an infectious disease specialists to "cure" this Lyme disease. Can you provide any insight or guidance (nutritionally, supplements, etc.)?

As a side note, I was recently treated for two months with Zithromax, then Cipro, then Biaxin for a sinus infection.

That does not mean you have Lyme disease. A Western Blot is confirmatory with at least 4 bands, not just two. You have to be careful here because there are a large percentage of people who are told they have Lyme as a result of inconclusive tests that do not really have Lyme. They then undergo unnecessary and sometimes damaging treatments with antibiotics. If it turns out you really do or did have Lyme disease, it would have been likely that taking the other antibiotics you did for the last two months would have "cured" it anyway. My advice is to fix your diet to perfection, take probiotics and the right supplements, and then follow the Lyme titer in a month to see if it is improving/stable or worsening. Do not be in a rush to take more antibiotics.

I live in South Carolina and there are deer everywhere. I noticed a bulls-eye rash on my arm that is about 1.5 inches across and has a red center, then regular skin, and then a red ring. My sister-in-law says the ring is diagnostic and that I need to start antibiotics. How do you recommend I proceed?

The Lyme disease rash has certain identifying characteristics. A bulls-eye alone on a small rash does not identify Lyme. The main identifying feature is the large rich-colored oval with edges of the rash growing outward each day, especially as the ring is fading. Plus, you have no history of a tick bite, or other suggestive symptoms. You should not self-diagnose, but see a physician if the rash is not improving or expanding in size.

Here are the indicators that I might have been exposed to Lyme disease:

Should I take an antibiotic now?

You cannot get a Lyme-related rash in a different location within 48 hours of a tick bite, so, that other rash was not Lyme related. The tick has to stay embedded and sucking your blood for at least 36 hours and usually 48 hours to transmit Lyme anyway, and that did not happen.

So, there is not a shred of evidence you have Lyme disease.