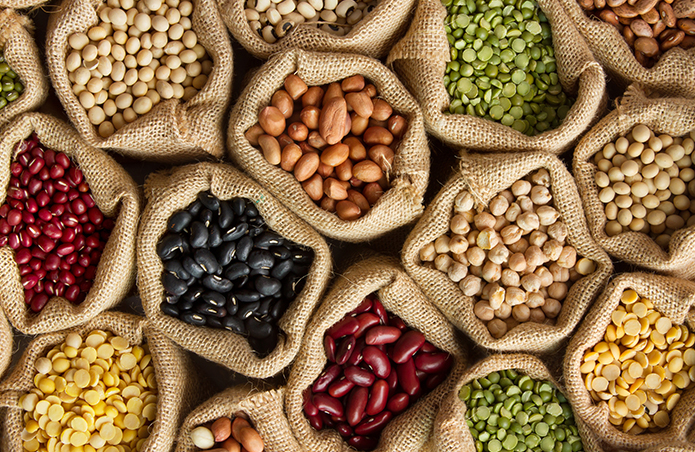 Beans as the major starch source in the diabetic’s diet have the potential to make a huge positive impact on their long-term health. Beans are nutritionally superior to whole grains and should be the preferred starch source for diabetics.  – I have taught this for years and often call my dietary recommendations for diabetics “the greens and beans diet” (learn more in my book The End of Diabetes).

A study published by Dr. David Jenkins’ research group (Jenkins originally developed the concept of the glycemic index) confirmed the advantages of beans over whole grains, especially for diabetics.1

One-hundred twenty-one type 2 diabetics were split into two groups and fed two different diets for a period of three months. One group had a “low-glycemic index legume diet,” which emphasized beans and other legumes and the other group had a “high wheat fiber diet,” which emphasized whole wheat foods and other whole grains. The bean group was instructed to consume one cup/day of beans, lentils, or other legumes. The grain group was instructed to consume an equivalent amount of a cooked whole grain or whole wheat bread, pasta or cereal daily.

The table below summarizes the changes that occurred over the three-month period in each group, and whether the improvement in the bean group was significantly greater than that in the grain group:

As evident from the table, the bean group’s fiber intake increased more and GL decreased dramatically more compared to the grain group.  This highlights important nutritional differences between beans and whole grains. Comparing fiber content, even intact whole grains don’t come close to beans.  Plus, much of the starch in beans is resistant starch and slowly digestible starch, which limits the overall glycemic effect of the carbohydrate in beans and are fermented into anti-cancer compounds in the colon. Beans are also higher in resistant starch than most grains.

Hemoglobin A1c, or HbA1c is a measure of the percentage of the hemoglobin in the blood that has been glycated (has had a sugar molecule added to it); the higher your blood glucose, the more glycation occurs. The HbA1c result is an indicator of blood glucose levels over the previous three months. After three months on the bean-enriched or grain-enriched diets, this measure of long-term glycemic control was improved in both groups, but a greater improvement was seen in the bean group.

Although it may seem small, a 0.5% decrease in HbA1c is actually quite large, considering that a “healthy” (nondiabetic) A1c is below 6.0 percent, and a poorly controlled diabetic level is 8.0 percent or higher. The authors note that A1c reductions in the range of 0.5-1 percent translate into significant risk reductions for complications such as kidney damage.3,4 A small improvement in HbA1c (like the half-point improvement here) is very significant, as it could represent years of lifespan gained or lost.

People who eat more beans tend to have lower blood pressure (not to mention greater fiber and mineral intake, lower body weight, and smaller waist circumference).5 Beans are rich in fiber (especially soluble fiber) and minerals, and low in GL – characteristics that have anti-hypertensive effects.1,6-10 The decrease in blood pressure in the bean group significantly improved their calculated Framingham risk score, an estimate of heart disease risk over the next ten years. This is an extremely important point, since most diabetics die of heart disease or stroke.11

However, this study shows that when diabetics rely on beans as their primary carbohydrate source, they get even more benefits than from whole grains. This is just more evidence of how special beans are in their nutritional superiority as a carbohydrate source.

In The End of Diabetes reversal program, when choosing carbohydrate sources I recommend: