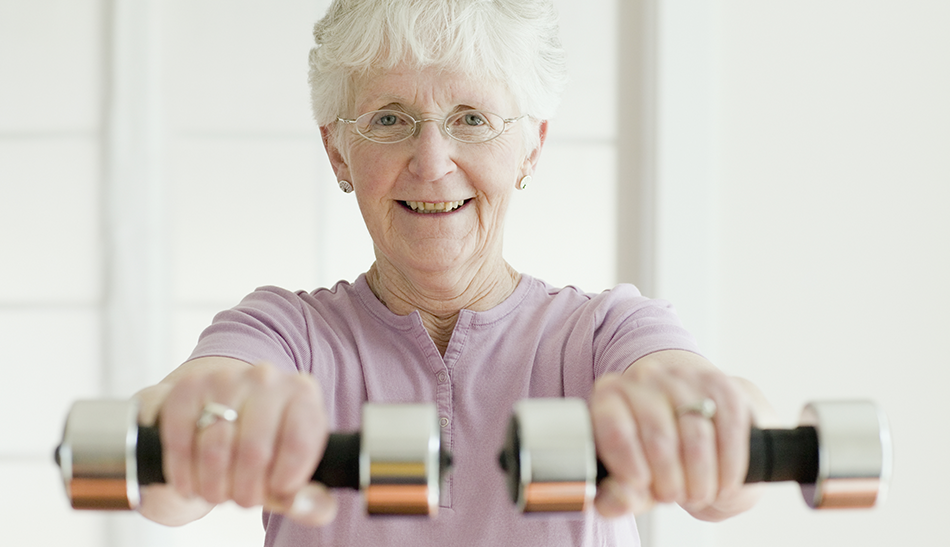 Exercising to improve muscle strength is not only good for keeping your body in shape, it’s good for the brain and may reduce the risk of developing Alzheimer’s disease.  As part of Australia’s Alzheimer’s research project, they conducted The Study of Mental and Resistance Training (SMART) to determine whether strength training and/or computer brain training exercises could help people at risk for Alzheimer’s disease improve their brain function and minimize that risk. Although previous research has shown benefits of aerobic exercise (such as walking, biking, or jogging) for preventing Alzheimer’s disease, there has been much less research on resistance (strength) exercise.

The SMART trial studied 100 participants between the ages of 55 and 86 with mild cognitive impairment (MCI). MCI involves memory and thinking problems, but does not affect the normal activities of everyday life. However, MCI may be an early sign of Alzheimer’s disease, a pre-dementia condition. Someone with MCI has about a 30 percent chance of progressing to Alzheimer’s over the course of 10 years.1 The SMART trial is part of the ongoing search for treatments that could restore and maintain brain function in people with MCI, to reduce their risk of developing Alzheimer’s disease.

Design of the SMART trial

To directly compare brain training, muscle strength training and a combination of both, they divided participants into four groups:

The resistance exercise routine was high in intensity (about 80-90 percent of maximum strength) and progressive, meaning the weight was adjusted over time as participants’ strength increased. Cognitive training consisted of computer exercises aimed to improve memory, executive function, attention and speed of information processing. Participants completed their assigned activities twice a week.2

The improvement in cognitive scores in the resistance trained individuals was backed up by MRIs showing changes in the brain. The MRIs confirmed an increase in thickness in a region of the brain called the posterior cingulate cortex. This is an important finding because loss of gray matter in this region is a marker of Alzheimer’s disease.4

The resistance training groups increased upper body, lower body, and whole body strength, and aerobic capacity. The amount of strength gain – lower body strength in particular – correlated to the amount of cognitive gain – the stronger the participants got, the more their brain function improved.5

How does strength training work in the brain?

Future research will be needed to determine how resistance exercise accomplishes this improvement in brain function. Aerobic exercise improves blood flow in the brain, leading to more efficient delivery of oxygen and nutrients. It also promotes the production of brain-healthy molecules such as brain-derived neurotrophic factor (BDNF), which supports growth of new brain cells, plus survival, repair, and enhanced connectivity between brain cells.6, 7

Resistance exercise may work similarly. Improvements in inflammation and insulin sensitivity are probably also involved.7  In addition, increasing muscle strength may prevent an excessive drop in IGF-1 in older people. Of course, high IGF-1 (insulin-like growth factor 1) is undesirable, linked to cancer and premature death. However, in the elderly, IGF-1 may become too low, and this negatively affects brain function.8

In addition to brain function, resistance training has the benefit of increasing muscle mass and strength, which helps to prevent bone loss, frailty, and falls. Strength training has an advantage over aerobic exercise for older adults as it can be done seated.  In addition, it is more accessible for people with conditions such as osteoarthritis that make walking and other aerobic activity difficult. Plus, resistance training can improve aerobic fitness. Even once brain function had started to decline, this strength exercise intervention made a difference.

Eating a Nutritarian diet is the most important thing a person can do to delay aging, live long and prevent dementia, but we also know that being fit, strong, and active is also important and effective for staying healthy as we push the envelope of human longevity.