Don’t Fall for the Myths About Soy 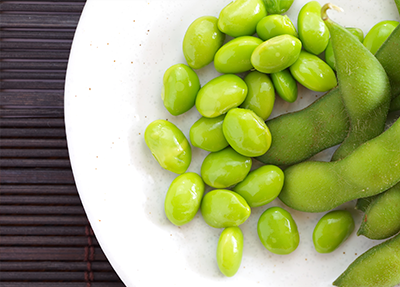 Contrary to the negative soy information floating about in today’s technological world, the scientific consensus shows soy is essentially beneficial.  Actually, soy is the subject of some of the worst health misinformation on the internet. We need to tune out this misinformation and follow the science. Greater intake of soy foods is linked to a decrease in the risk of breast cancer, prostate cancer, and cardiovascular disease.1, 2

Soy contains phytoestrogens (“plant estrogens”) called isoflavones which are said to be weak estrogens, but it’s actually more complicated than that. Isoflavones have both estrogenic and anti-estrogenic effects. . The evidence suggests that, because of their complex relationship with different estrogen receptors, soy isoflavones have beneficial anti-estrogenic effects in breast tissue while also having beneficial estrogen-mimicking effects in bone tissue.1,3

No. Since estrogen causes breast cancer cells to proliferate, and cumulative estrogen exposure increases breast cancer risk, there was an early theory that there might be a link between soy foods and breast cancer.  At that time, however, in Asian countries, where soy was a staple food, breast cancer rates were much lower than those in the United States. This paradox launched hundreds of studies. The results of some individual studies were neutral, and, importantly, no studies in humans have suggested an increase in breast cancer risk; most show a decrease.

Important to note: soy appears to be most protective when eaten during adolescence, when breast tissue is most sensitive to influences from the diet and environment.7

Does soy reduce the risk of other cancers?

Yes. Soy isoflavones have additional anti-cancer effects.8 In a 2009 meta-analysis, higher soy intake was associated with a 26 percent decrease in prostate cancer risk.9  Soy has also been linked to decreases in risk of lung, stomach, and colorectal cancers.10-12

Do soy phytoestrogens have feminizing effects on men?

No, not at reasonable levels of intake. This internet frenzy seems to be based on sensationalized reports about one rare case of a man who developed breast swelling, who had been drinking three quarts of soy milk every day for over six months. When he stopped overconsuming soy, the issue resolved.13 Of course, nobody should eat or drink that much soy; nobody should even consume that much of any one food. Even in Asian countries, where soy intake is much higher than in Western countries, three quarts of soy milk would about 7-8 times the typical isoflavone intake.14

This case is simply not relevant to people eating moderate amounts of soybeans, in edamame, tempeh or tofu, or one serving of soy milk, and scientific research documents the safety of that. A meta-analysis evaluated the data from 15 different placebo-controlled trials of soy foods, soy protein, or isoflavone supplements. The studies measured several indicators of testosterone levels, including total testosterone, free testosterone, and sex hormone binding globulin. There were no significant effects in these studies on men’s testosterone levels, estrogen levels, or sperm quality.15

Another review of the studies looking at the potential feminizing effects of soy similarly concluded that there is no cause for concern.14 Furthermore, a recent observational study on couples using in vitro fertilization found that soy food and soy isoflavone intakes were not associated with rates of successful IVF outcomes, suggesting soy intake does not have any negative effects on male fertility.16

Does soy harm the thyroid?

I address this question in detail here.

Should we only eat fermented soy products?

This is a myth, the origin of which appears to be because soybeans contain phytate. Phytate, present in legumes and grains, was once thought of as an anti-nutrient, but more recent research has found beneficial health effects of phytate, for bone health in particular.

Like in other beans, indigestible carbohydrate (fiber and resistant starch) in soybeans provides food for intestinal bacteria, and for some people fermentation of these carbohydrates in the colon may cause gas and discomfort. Fermentation of soy foods may reduce this discomfort, but you would also be reducing the beneficial prebiotic fibers.21 On the other hand, there is some evidence that we may receive some additional isoflavone benefits from fermented soy products.22

Bottom line: both unfermented (tofu, edamame, unsweetened soy milk) and fermented (tempeh) soy foods can have a place in a Nutritarian diet.

Is all soy genetically modified, even organic soy?

No. The USDA’s organic standards prohibit the use of genetically modified organisms in certified organic foods. In addition, they require certified organic farmers who plant organic soybeans and have neighboring genetically modified soybeans to take appropriate, farm-specific preventive measures to avoid cross-contamination and conduct testing.  Cross-pollination of non-GMO soybean plants by GMO plants is far less common than many people believe, and the assertion that all soy has been contaminated does not have the science to support it. In field trials, presence of the transgene in adjacent non-GMO soybean plants was a fraction of a percent (0.1-0.5%), and non-GMO soybean plants that were 10 meters away from the genetically modified plants showed no contamination with the transgene at all.28-30

Which soy foods should I eat, and how much?

Edamame, tempeh, and tofu are healthful foods that can be included in a Nutritarian diet with all other kinds of beans. Unsweetened soy milk without additives is useful in recipes for smoothies, salad dressings, and sauces.

The association between minimally processed soy intake and a reduction in the risk of cancers has been reported over and over again. However, keep in mind that because some is good doesn’t mean eating a soy-based diet is healthful; we should not eat lots of soybeans to the exclusion of other beans and other health-promoting foods. Two to four servings a week is reasonable.  Variety of natural plants is crucial for obtaining diversity in protective phytochemicals. Avoid isolated and concentrated soy protein; eat a variety of beans such as black beans, chickpeas, and lentils; and enjoy some edamame, tofu and tempeh as well.