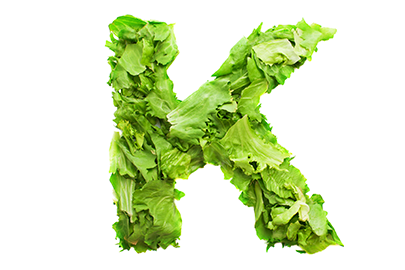 Vitamin K may not be as popular and well known as other vitamins and if known at all, it’s for the important role it plays in blood clotting. However, vitamin K is also essential to building strong bones and preventing heart disease.

There are two natural forms of vitamin K. Vitamin K1 (also called phylloquinone) is plentiful in leafy green vegetables, such as kale, collards, spinach and mustard greens, so it’s easy to obtain this vitamin when following a Nutritarian diet.

Vitamin K2 (a few different substances called menaquinones), is produced by microorganisms and scarce in plant foods, so K2 is more difficult to get from a Nutritarian diet. The human body can synthesize some K2 from K1, and intestinal bacteria can produce some K2, but these are very small amounts.5

There is evidence that both vitamin K1 and K2 are important for good health.

Vitamin K is important for:

It is unclear why vitamin K2 seems to be more beneficial than K1 for the cardiovascular system; it could be due to differences in absorption or biological activity between the vitamin K forms.2,15 Regardless of the reason, the evidence suggests that taking in vitamin K2 in addition to K1 is likely beneficial to help protect against vascular calcification.

Ongoing research on vitamin K is revealing new ways that vitamin K acts to maintain good health. There is some evidence that vitamin K is involved in insulin metabolism, and higher intake of vitamins K1 and K2 are associated with lower risk of type 2 diabetes.16,17

Future studies will also help us to understand why K2 appears more protective against blood vessel calcification, and whether there are benefits of vitamin K that are exclusive to either K1 or K2. Leafy green vegetables provide generous amounts of vitamin K1, and getting K2 from a supplement is likely beneficial.