Arsenic: The Dark Side of Rice 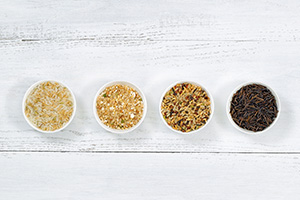 The Nutritarian diet is largely focused on vegetables, beans, fruits, seeds and nuts with all of their health promoting vitamins, minerals and phytochemicals, as can be seen in my Nutritarian Food Pyramid, and whole grains.

As the most widely consumed grain worldwide, rice serves as a staple food for a large part of the world. However, not all rice is equally healthful. Rice varies by type and origin, which contribute to both its nutritional content and potential level of arsenic contamination.

Among the layers of grains, the germ is the nutritional jewel

A whole grain contains a complete “kernel” that consists of three edible parts; the bran, endosperm, and germ.Whole grain rice is classified by the color of its bran and there are four groups: brown, black, purple, and red. Wild rice is similar, but technically not in the rice family.

The most commonly grown commercial rice is brown rice. When brown rice has its bran and germ removed it is called white rice.

This processing allows white rice to have a longer shelf life and shorter cooking time, but the healthful fiber in the bran and beneficial nutrients in the germ are lost. More colorful pigmented whole grain rice varieties are becoming increasingly popular and red, black, and purple rice exhibit higher antioxidant activity as compared to brown rice.

Overall, black rice, which is rich in anthocyanins, showed the highest antioxidant levels of all rice varieties, followed by red and purple, then brown, and lastly white rice.1

Arsenic: the dark side of rice

One of the four principles of the Nutritarian diet is to limit our exposure to contaminants, infectious agents and toxins. Arsenic is a toxic element that is naturally present in the earth’s crust. As such, it is found in the soil, water and some foods.

In addition, some areas have increased concentrations of arsenic as a result of industrial pollution, the use of arsenic-based drugs in poultry production, and arsenic-containing pesticides and fertilizers.2-3

All plants can absorb some arsenic, but rice can absorb up to ten times as much as other grains.4-5 This is due to how the rice (including wild rice) is grown, in flooded paddy fields. The soil in the fields, when covered with water, creates conditions that allow arsenic to be converted to more readily absorbable forms.4 Arsenic accumulates most in the outer layer of rice, which is the reason that whole grain rice, with its bran intact, can have up to 80 percent more arsenic than white rice.2 White rice is high glycemic food that is low in nutrients, so don’t think it is the better alternative.

Arsenic can occur in two main forms: organic and inorganic compounds. This use of “organic” is a chemistry term and generally means “containing carbon,” unlike the agricultural term, which refers to food production, pesticide use, and farming practices.

Inorganic arsenic is more abundant and more toxic, but both forms are considered a public health concern. Arsenic is well recognized as a human carcinogen and chronic exposure (via inhalation or from high-arsenic drinking water) is a known cause of skin, lung, and bladder cancer and is also associated with other cancers such as kidney, liver, and prostate.2

Although whole grain forms of rice have a superior nutritional profile compared to white rice, they also have a higher risk of arsenic contamination. When you do eat whole grain rice, these are some ways to minimize arsenic exposure:

Find out where rice was grown

On a Nutritarian diet, the most emphasized starch sources are beans, lentils and other legumes. There are also healthful starchy vegetables such as butternut squash, winter squash, carrots, beets, parsnips, rutabaga and turnips, and a variety of whole grains such as amaranth, barley, buckwheat, bulgur, farro, millet, and quinoa.

If you utilize a variety of these foods, arsenic exposure from the occasional serving of rice will not be a concern. However, as a result of this arsenic issue, brown rice should not be eaten often and regularly.

The recipes in the Member Center Recipe Guide can help you plan delicious grain meals. For example, the Broccoli Mushroom Casserole can be made with either farro or another grain.