Are raisins worth the risk of high pesticide levels? Choose organic 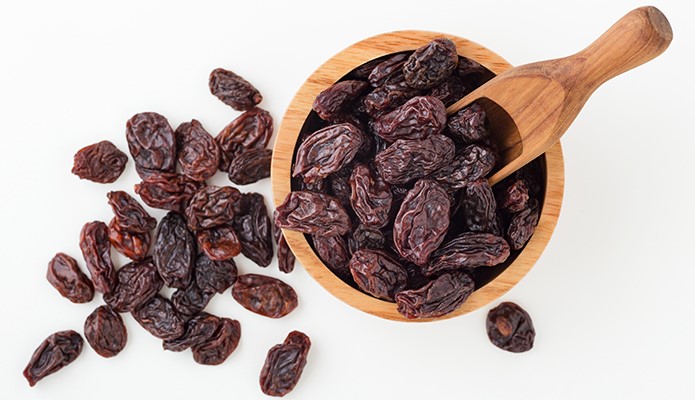 Each year, the Environmental Working Group (EWG) uses data from the USDA Pesticide Data Program (PDP) to create their Dirty Dozen and Clean Fifteen rankings of fruits and vegetables. The Dirty Dozen list allows shoppers to see at a glance which conventionally grown items – such as strawberries and apples – contain high levels of pesticide residue, and should be avoided, in favor of organic versions. This year, EWG highlighted a problem with a popular item: raisins.

The USDA measures pesticide residues on thousands of fruit and vegetable samples every year. Each year, the Environmental Working Group (EWG) uses that data to rank fresh produce based on a collection of metrics, such as the percent of samples with detected pesticides, average number of pesticides found, and average concentration of pesticide.

In 2020, EWG published its list as usual but added a notice about a food not usually included in its rankings – raisins. EWG usually only considers fresh produce in their rankings, however, USDA tested raisins in 2018 (for the first time since 2007), and based on EWG’s ranking methodology, raisins would be #1 on the Dirty Dozen list if they were included.

Learn more: Get to know the Dirty Dozen and Clean Fifteen

The EWG found raisins to be a particular concern for several reasons:

What pesticides are we talking about here?

The specific pesticides detected on most raisin samples were a neonicotinoid pesticide (imidacloprid) plus bifenthrin and tebuconazole, which have shown developmental neurotoxicity in animal studies.2-4

Neurodevelopmental consequences of gestational and lactational exposure to pyrethroids in rats.

The effects of perinatal tebuconazole exposure on adult neurological, immunological, and reproductive function in rats.

Organic raisins are better than conventional

Raisins are a dried fruit, which means their sweetness is concentrated. You should limit your consumption of any dried fruit, compared to fresh fruit. If you are going to use raisins, it makes sense to choose organic, especially for children. Fumigant residues are not measured as part of the USDA’s Pesticide Data Program, but organic production forbids the use of fumigants.5  The gases used for fumigation may be hazardous for workers, the environment, and consumers alike.

Eating vegetables and fruits, whether organic or conventional, protects against chronic diseases. Even the highest pesticide residue levels detected on produce are very far below the chronic reference dose, the estimated dose of a chemical a person could be exposed to daily throughout life without any harmful effects.6

In addition to the environmental benefits of organic agriculture, there may also be health benefits. That’s why I recommend choosing organic produce whenever possible.

Related: Should we only buy organic produce?

If you don’t have organic raisins on hand, you could make some swaps.

Organic dates can be substituted for an equal amount of raisins in many recipes on DrFuhrman.com – especially when the instructions call for ingredients to be blended.