Desserts To Live For


Have your cake and eat it, too

Talia Fuhrman takes a healthy approach to sweet indulgence with her new cookbook, Desserts To Live For 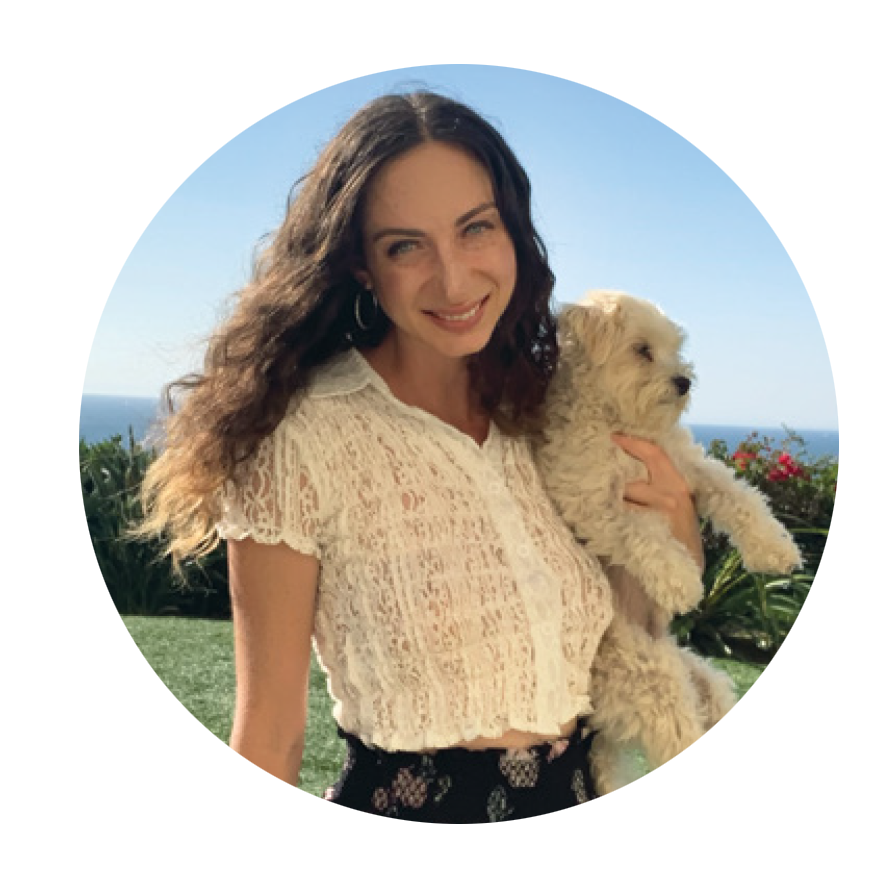 Nutritarian chef Talia Fuhrman just released her first cookbook, Desserts To Live For, a collection of “heavenly desserts with zero guilt, zero sacrifices and zero risks of bodily harm . . . with only good-for-you ingredients.”

The eldest daughter of Dr. Fuhrman and his wife Lisa, Talia learned from an early age about the connection between the foods we eat and the state of our health. Inspired by this message, she went on to earn a Bachelor’s degree in Nutritional Science at Cornell University.

Talia’s career has focused on connecting the core concepts of nutritional excellence in a way that is fresh and entertaining, filled with practical tips and the occasional touches of whimsy. In 2014, she released her first book, Love Your Body, a guide for young adults who wanted to embark on a healthy lifestyle. Now, with Desserts To Live For, she’s widening her audience and exploring the wonders of healthful treats. “Using this book as your tool,” she writes, “You can ‘eat your cake’ and stay healthy, too.”

Talia’s writing and recipes have been featured in publications and websites including Women’s Health Magazine, Psychology Today, Rodale Press and Vegetarian Times, MindBodyGreen.com, and Thought Catalog. 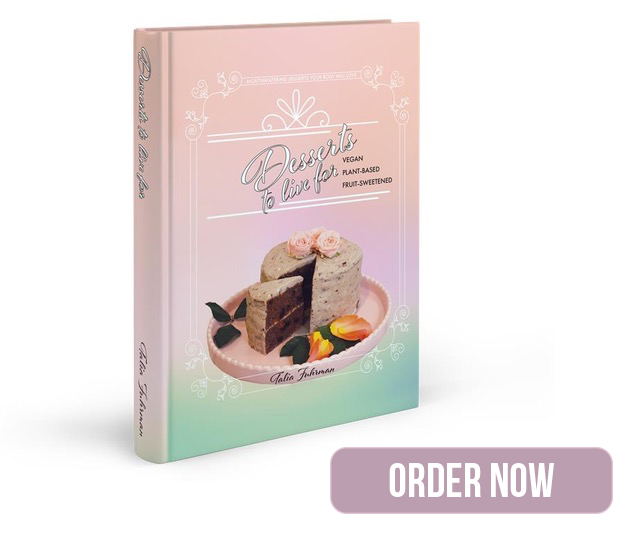 A Q&A with Talia Fuhrman

Q. Have you always been someone who likes to cook and bake?

Talia: It’s funny how people discover what makes them happy. I started baking for fun in high school, but it wasn’t until college was getting very stressful that I began baking as a stress-reliever. I already had nutrition down from being my father’s daughter, taking up learning about it from other experts and getting my degree in it at Cornell U. That made baking more challenging in the beginning because I was pretty tempted to use more conventional ingredients like maple syrup, honey and other liquid sweeteners in those early days. However, the challenge to figure out how to make just as delicious healthier treats was something that made me excited! I was 20 years old or so when I really began diving into this.

Q. What was your inspiration for writing this book?

Talia: After graduation and then after my first book, Love Your Body, came out in 2014, I thought to myself: What’s next? And that’s when the idea really hit me to do a healthy desserts cookbook, because I’d been baking and creating my own recipes for quite a few years at that point. My food photography skills were nothing like they are now, but I really enjoyed taking photos of what I made.

Q. Can we really have our cake and eat it too? Or rather – can desserts really be made with healthful ingredients?

Talia: Yes, a thousand times over! And that’s what I am so thrilled to show people with this book. The key is to understand what is healthy and what isn’t – and why. What happens in the body when we ingest certain foods? How do some foods protect us from disease while others contribute to it? It’s a fascinating subject, and likely one of the most important we could ever learn. There are way too many myths and misinformation in the field of nutrition and I think that makes many people feel hopeless and give up the quest to prioritize “nutritional excellence,” words I hear my dad use often.

There ARE sweets in the form of natural fruit that are loaded with antioxidants and fiber. The key is figuring out how to bake with them in a way that doesn’t sacrifice taste, and that’s what this book offers – that solution. I really love Medjool dates because they are so incredibly sweet and taste just like sugar in baked treats, but they are also packed with fiber and nutrients that promote wellness. The less processed a food is, the better. A big myth is that liquid sweeteners like honey, maple syrup and agave nectar are healthy, but when we study how they are digested, there is ample research to show that the body processes them in a way almost as deleterious as sugar itself. This book offers an easy, feasible, completely delicious solution.

Q. Obviously, a lot of trial-and-error went into these recipes. What was your biggest triumph in the kitchen? Your most spectacular “oops-that-won’t-work”?

Talia: Oh man, truer words have never been spoken. As for a major success, I never imagined that healthy tiramisu would come out so delicious. (I was really happy with how the photos came out for that recipe too!) I didn’t have to do much tweaking. It was just awesome. I’m not sure how many days I’ve spent on recipes that didn’t make into the cookbook, but the number is impressive. I remember spending all day on a cookie recipe, but in the end the pictures weren’t up to my standards and neither was the taste. I’ve also had a few smoothies explode in my kitchen and quite a few bars that I didn’t like the photos of enough and had to reshoot, that sort of thing.

Q. They say we eat with our eyes first, and those photos in the book are stunning. Do you think making the desserts look beautiful makes them taste even better?

Talia: Scientific studies have been conducted on this. And, according to those studies, yes, we tend to think pretty food tastes better! A study by the Crossmodal Research Library at the University of Oxford found that the prettier a dish looks, the better it seems to taste.

Researchers served 30 men and 30 women one of three salads containing the exact same 17 ingredients, all prepared the same way. One of the salads was presented as a traditional chopped salad with the ingredients piled on top of each other. The second was presented in what the researchers called a “neat” formation, with all the ingredients arranged individually on the plate. The third salad was modeled to look like the artist Wassily Kandinsky’s famous “Painting Number 201.” Participants were asked to answer questions regarding appearance before eating a salad, then regarding taste after finishing the salad. The researchers found that participants rated the Kandinsky-inspired salad as tasting better than the other salads. It also received higher ratings for artistic presentation and complexity. It makes sense! We live during a time where there is scientific research done for almost everything. I love that people have looked into this. I think that makes me a nerd!

Q. Readers may be surprised that the cookbook includes a few of your original poems. Do you feel that cooking and writing are connected as creative outlets?

Talia: I originally planned to include more of my poems in the book. But when I completed the first draft, I could see that that the poems were taking up a lot of space – and I didn’t know if people would want uplifting poems with their recipes. So I left in just a few. I did love the idea of doing something different with a cookbook and I am undeniably a creative soul. I believe both cooking and writing are beautiful forms of expression, and in that way, they are connected. They do different things for me, but both have been priceless in my life. Sometimes I’m in the mood for cooking and baking, and other times I’m in the mood to write. I love that I can enjoy each outlet and it doesn’t have to be one or the other.

Q. How did being brought up in a Nutritarian household – with Dr. Fuhrman! – influence the way you regard food and health?

Talia: How did it not? I tell people I learned about the importance of what we eat before I learned how to read. I have many stories about what it was like being a kid in the ‘90s and growing up eating differently than my peers. My parents did a fantastic job of teaching me and my siblings about nutrition, but also allowing us a certain level of freedom to make our own choices. I’m one of four kids and we all gravitated towards a nutrient-dense, plant-based diet as adults. I attribute this, at least in part, to the way we were raised. We all understand how important it is to prioritize optimal nutrition and then we also LOVE the taste of healthy food.

I think a lot of people don’t understand that taste buds are malleable, and we tend to enjoy the foods we are accustomed to eating. Also, our preferences can change the more we introduce a food. People tend to love eating healthfully the more they do it. On top of this, my entire life I witnessed my dad being a miracle worker and curing people from diseases and health issues left and right. What a beautiful gift to see.

Q. In the book, you confess that you love dark chocolate. Can you share your favorite chocolate recipe?

Talia: Totally! The chocolate coffee cake from the book is awesome! The Nut-Free Chocolate Cake and the Walnut Rum Mocha Cake are also incredibly chocolaty treats. For a fast, super easy treat, I love the Peanut Butter Black Bean Brownies! So rich and chocolaty. So that’s four favorites! I can’t pick just one. 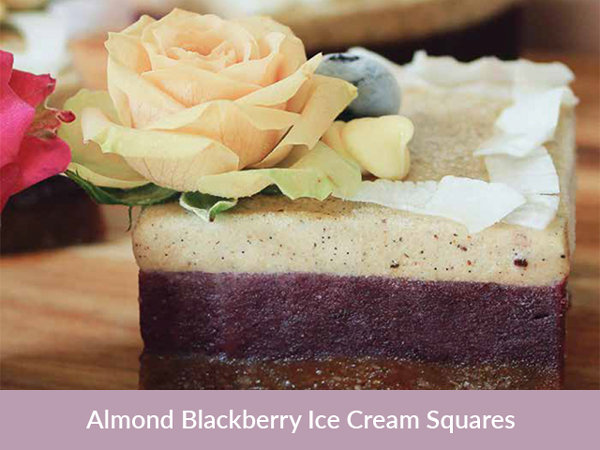 Take Action:
It’s time to rethink our idea of dessert

Round off your meal with a healthful and delicious dessert to signal your body that you’ve finished eating. If you’re pressed for time, fruits (especially berries) make a terrific treat –
try fresh blueberries, or some thawed frozen cherries. Search out recipes for baked, cooked or frozen treats that are sweetened only with whole fruit, and contain no SOS (salt, oil or sugar) or white flour.