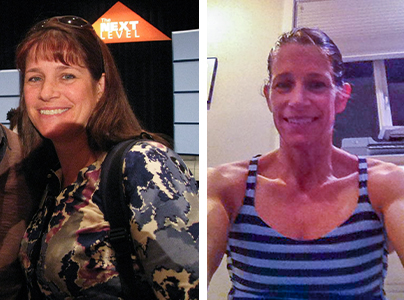 I was a world class athlete in two sports and participated in the US Olympic Trials in swimming (1984) and rowing (1996). Throughout my years competing, I ate the typical standard American diet complete with meat and dairy products of all kinds. Over the years, after retirement, I got fatter and fatter.  Over eight years I gained roughly 45 pounds.  I am 5'9" and my normal athletic weight was 130 to 140 pounds.  Two years ago I tipped the scales at 179 pounds.  I live in Issaquah, WA, and I was also suffering from seasonal affective disorder and some depression following the death of my uncle in 2008. We were very close and I served as his primary caregiver.

In 2009 and 2010 I tried to regain my fitness and lose weight with exercise alone.  I threw myself into a program where I was exercising two to three hours daily.  After a full year, I lost zero pounds. Both of my brothers were diagnosed with heart disease the same week.  I took it as a sign to get my act together and I discovered Dr. Fuhrman. Gradually I began thinking about competing again in rowing in the Indoor Rowing World Championships.  In 1997 I won a world title and held the world record.  I set a goal in my mind to return and compete in 2013 in the 40 to 49 age group.  I am currently 48.  The competition is in February in Boston and I am going to race in the LW class.

I attempt eating my G-BOMBS daily and I work very hard to get two pounds greens in daily.  The Vitamix helps.  I am mostly vegan now, but I do eat fish very rarely, perhaps two or three times a year. Otherwise, I eat two pounds greens, one pound fruit, one cup legumes/beans daily, a scant amount of grain (we sprout now), and some nuts/seeds. My cholesterol readings are cholesterol 145; triglycerides 87; HDL 48; LDL 79. My current weight is 135 pounds and my body fat percentage is pretty low.

I have more feminine post-weight loss pictures, but since Dr. Fuhrman is a retired world class skater, I thought he would appreciate the muscularity I have achieved on approximately 50 g of vegetable source protein daily.

If I ever meet Dr Fuhrman, I would give him the biggest bear hug.  I am so thankful to him and to all of the healthy lifestyle physicians for giving my life back to me!  Thank you, thank you!