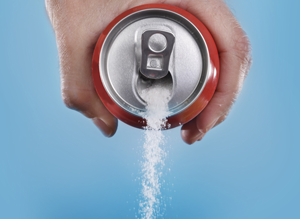 There are two types of fat in your body and each carries their own risks. The location of body fat may be just as important as amount of fat when it comes to health risk.

The most visible type of fat is subcutaneous fat, which is located just under the skin. Examples are the “love handles” that men tend to have; for women, this is often noticeable in the hips and thighs. This type of fat is easy to see and to grab.

A more dangerous type of fat is visceral fat, which lies much deeper, around internal organs like the liver pancreas and intestines. Drinking sugar-laden beverages, such as sodas, is an important factor in gaining visceral fat, which is associated with more serious health risks.

A January 2016 study in Circulation reported that the consumption of sugary drinks preferentially drive visceral fat accumulation adding to the long list of deleterious health effects associated with soda and other sugar-sweetened beverages (SSBs). This type of fat is even more diabetes and heart disease promoting.

As part of the famous Framingham Heart Study, men and women were followed for six years to look at the change in their visceral fat volume. This was determined by CT scans which provide a more precise method differentiating visceral fat from subcutaneous fat in the abdominal area, compared to waist circumference measurement, which includes both subcutaneous and visceral fat.1

Difference between visceral and subcutaneous fat

Fat is a biologically active tissue, and visceral fat is especially problematic, associated with a number of cardiovascular risk factors, including hypertriglyceridemia, insulin resistance, chronic inflammation, an increase in small dense LDL particles and reduced HDL cholesterol. Partially this appears to be due to the close proximity of visceral fat to the liver. In addition, visceral fat appears to produce more pro-inflammatory compounds than subcutaneous fat.1, 3

As defined by body mass index (BMI), about one-third of Americans are obese.4 Abdominal obesity (defined as waist circumference >102 cm in men, >88 cm in women), is even more prevalent; 43.4 percent of men and 64.7 percent of women are abdominally obese, suggesting that excess visceral fat is a very common problem.5  A large waist circumference has been linked to negative outcomes even among people with normal BMI numbers. Additionally, some studies have compared two groups of obese patients with the same total body fat, but low or high levels of visceral fat. The high visceral fat groups were found to have evidence of greater insulin resistance than the low visceral fat groups, indicating a greater risk of type 2 diabetes.1

How to lose visceral fat

Where our body fat is distributed mostly genetic and varies by age and ethnicity, but we can control how much body fat we gain. According to current evidence, the best way to lose visceral fat is to lose fat. Any loss of total fat will reduce visceral fat.1, 6

A Nutritarian diet, my recommended eating style, is designed to help people break their food addictions, reach a healthy weight, and never gain the weight back.  Targeting foods that are nutrient-rich, while avoiding foods that promote fat storage can enable the body to remove dangerous fat, improve circulation, and prevent heart attacks, strokes and cancer.  To get maximum results, it is not merely about avoiding sweets and reducing calories, but flooding the body with immune-supporting micronutrients that facilitate repair and healing.  Regular exercise can also help reduce visceral fat.