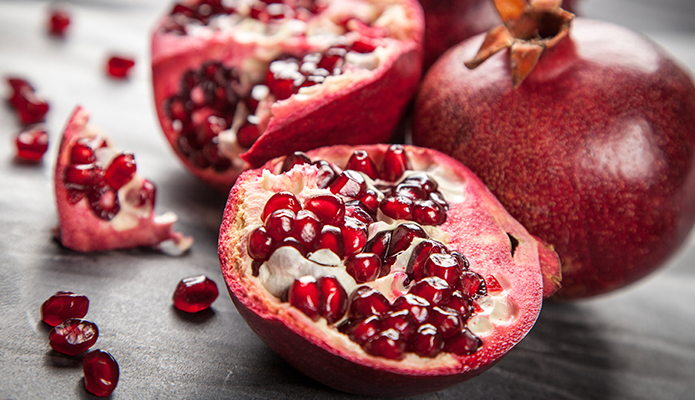 Ruby red, delicious and nutrient rich pomegranates pack a mighty punch in safeguarding your health. Pomegranate contains a unique and powerful antioxidant called punicalagin, the most abundant antioxidant in pomegranate, responsible for more than half of the antioxidant activity of pomegranate juice.1

Pomegranate was one of the earliest cultivated fruits, and has been prominent throughout history in art, culture, and religion, from the story of the seasons in Greek mythology to Romeo and Juliet to the Bible.4,5

Pomegranate is ubiquitous in Middle Eastern cooking and its super food status, unique flavor and texture has made it increasingly popular in the U.S. A pomegranate contains hundreds of tiny, crisp arils; each aril is a seed encased in a juicy pulp, a tasty mix of sweet and tart flavors.

Removing the edible arils from the pomegranate is easy when you know how to do it. The easiest way is to cut it around the diameter, split it into two and then pound the back with the back of a large serving spoon. The flavor and health benefits of pomegranate make the effort well worth it.

Enjoy fresh pomegranates, especially when they are in season, and store some arils in the freezer to get the health benefits of pomegranate all year round. Pomegranate season typically runs from October through February. When selecting pomegranates, look for a ripe, deep-colored fruit with a red to reddish-brown outer rind that is heavy for its size.