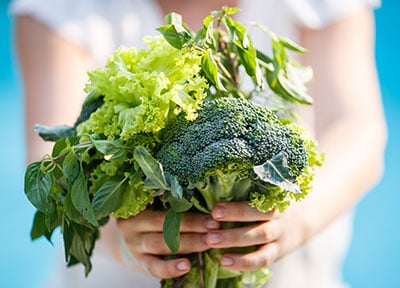 Prevailing food myths largely contribute to our overweight population and poor health for many. Lifestyle-related diseases are the most common causes of death, but according to a 2011 poll by Consumer Reports Health, 90 percent of Americans believe that they eat a healthy diet.1

Most Americans do not understand that whole plant foods are the best for our health – they are led to believe that processed foods labeled “low-fat” or “low-carb,” artificially sweetened beverages, pasta, grilled chicken, and olive oil make up a healthful diet.

The Standard American Diet (SAD) is made up mostly of disease-causing foods, with 30 percent of calories from animal products and over 55 percent from processed foods.2 In addition, 43 percent of Americans polled reported that they drank at least one sugar-sweetened drink each day, 40 percent said that they eat ‘pretty much everything’ that they want, and 33 percent of overweight and obese individuals reported that they were at a healthy weight.1

This highlights the nutritional misinformation that abounds in our society. Americans have not yet grasped the concept of nutrient density and its importance for health and longevity.

The nutrient density in your body’s tissues is proportional to the nutrient density of your diet. Micronutrients fuel proper functioning of the immune system and enable the detoxification and cellular repair mechanisms that protect us from chronic diseases. Dr. Fuhrman coined the term Nutritarian to define a diet style which provides a high ratio of micronutrients per calorie and a high level of micronutrient variety. 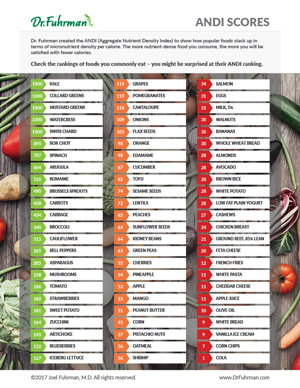 This simple equation defines how your health is related to the nutrient density of your diet.

Adequate consumption of micronutrients – vitamins, minerals, and many other phytochemicals – without excessive caloric intake, is the key to achieving excellent health.

To illustrate which foods have the highest nutrient-per-calorie density, Dr. Fuhrman created the aggregate nutrient density index, or ANDI. It lets you quickly see which foods are the most health-promoting and nutrient dense.

The ANDI ranks the nutrient value of many common foods on the basis of how many nutrients they deliver to your body for each calorie consumed. Unlike food labels which list only a few nutrients, ANDI scores are based on thirty-four important nutritional parameters. Foods are ranked on a scale of 1-1000, with the most nutrient-dense cruciferous leafy green vegetables scoring 1000.

It is also important to achieve micronutrient diversity, not just a high level of a few isolated micronutrients. Eating a variety of plant foods is essential to good health. It is important to include a wide assortment of plant foods in your diet to obtain the full range of nutritional requirements. Include onions, seeds, mushrooms, berries, beans and tomatoes as well as greens in your diet. They all contribute to the numerator (top number in the ratio) in the H=N/C equation.

For your good health, take a minute to evaluate the quality of your current diet and learn which foods you need to consume to improve it. A more comprehensive list of ANDI scores can be found in Dr. Fuhrman’s Nutritarian Handbook and ANDI Food Scoring Guide.

To determine the ANDI scores, an equal-calorie serving of each food was evaluated. The following nutrients were included in the evaluation: fiber, calcium, iron, magnesium, phosphorus, potassium, zinc, copper, manganese, selenium, vitamin A, beta carotene, alpha carotene, lycopene, lutein and zeaxanthin, vitamin E, vitamin C, thiamin, riboflavin, niacin, pantothenic acid, vitamin B6, folate, vitamin B12, choline, vitamin K, phytosterols, glucosinolates, angiogenesis inhibitors, organosulfides, aromatase inhibitors, resistant starch, resveratrol plus ORAC score. ORAC (Oxygen Radical Absorbance Capacity) is a measure of the antioxidant or radical scavenging capacity of a food. For consistency, nutrient quantities were converted from their typical measurement conventions (mg, mcg, IU) to a percentage of their Dietary Reference Intake (DRI). For nutrients that have no DRI, goals were established based on available research and current understanding of the benefits of these factors. To make it easier to compare foods, the raw point totals were converted (multiplied by the same number) so that the highest ranking foods (leafy green vegetables) received a score of 1000, and the other foods received lower scores accordingly.