Lung disease includes many conditions that affect breathing. More common lung diseases include chronic bronchitis and emphysema, which fall under the category of chronic obstructive pulmonary disease (COPD). Though there is a component of irreversible damage, typically from many years of smoking, in my medical practice over the last 25 years, I have seen numerous patients dramatically improve their COPD symptoms by adopting a Nutritarian diet. 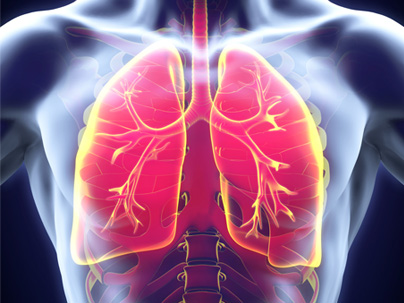 With chronic bronchitis, the airway becomes inflamed and overproduces mucus, which makes it difficult to breathe. With emphysema, there is destruction of the lung tissue, which affects oxygenation and the ability to breathe out effectively. COPD affects 5% of the population, and chronic lower respiratory diseases (including COPD) are the third leading cause of death in the U.S.1,2

Symptoms of COPD include

The major risk factor for COPD is cigarette smoking with severity of the disease related to the amount and length of time the patient has smoked. Environmental exposures to dust, gases, fumes, and organic material also increase the risk of COPD. A predisposition to allergies and a history of infection like tuberculosis also increase risk. Antioxidant deficiency leading to increased oxidative stress and free radical formation play a role in the development of COPD.3

Some lung diseases are restrictive, rather than obstructive, such as pulmonary fibrosis and sarcoidosis (an autoimmune disease). In these diseases, the lung is unable to fully expand, causing symptoms such as shortness of breath and coughing. Cigarette smoking and inhalation of dust and fumes are associated with an increased risk of these diseases.4

Bronchiectasis is an abnormal widening and other damage to airways, causing excess mucus to pool resulting in symptoms such as a chronic cough and shortness of breath. Causes of bronchiectasis include infections and cystic fibrosis.

Seasonal allergies and other infections, such as pneumonia, can also affect the airways and lung function.

Have you ever treated Chronic Obstructive Pulmonary Disease or Emphysema using the Nutritarian approach? Can a Nutritarian diet do more for my COPD than just help me lose the excess weight that drags me down and causes a lot of shortness of breath and wheezing problems? Is there any way a Nutritarian diet can improve my lung health?

I believe that nutritional excellence has a huge effect on slowing the decline in lung function and aiding in our body’s ability to repair tissue affected by COPD. Often times, not all of the lung tissue is permanently damaged meaning some of the lung has the opportunity to return to normal function. There is likely some hibernating or injured tissue that is not in the irreversible stage that can still come back to normal. However, the further this disease advances the more irreversibly damaged tissue is present, though I have seen some very advanced cases of COPD show improvement with a Nutritarian diet.