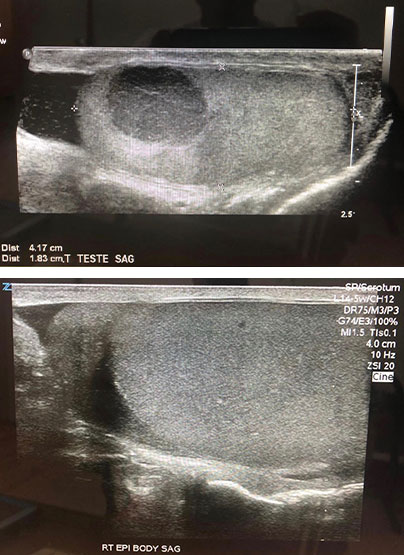 Starting at a young age Thomas was sickly, suffered from ulcerative colitis and then cancer; now lliving the Nutritarian lifestyle he has recovered from these debitlitating illnesses

I was raised with the SAD diet. My mother, being a true Italian, indulged every holiday and tradition with endless amounts of food that I loved to eat.  If I wasn't eating pasta with meatballs covered in cheese, or lasagna, I was eating chicken or fish in some rich and creamy sauce. Junk food like hot dogs, hamburgers, pizza, cold cuts, milk and cheeses filled our refrigerator, and cakes, cookies, and donuts filled our pantry. Such food and eating habits were passed along to me with great love and the best of intentions. Although fortunate to have such a wonderful family, little did I know the drastic affects it was having on my body.

For as long as I can remember, dating back to when I was a little boy, I was always sick in some way. I was constantly on medications for colds and flu growing up, and I suffered daily from allergies and asthma. My nose was always running, my throat was always sore, and my stomach was often upset. At age 5, I was hospitalized with fever of over 105, and my elementary school attendance was filled with long illnesses that often took me out of school for weeks at a time. At age 15, I was diagnosed with ulcerative colitis shortly after a long course of the antibiotic, Biaxin, was given to me for the treatment of mononucleosis. I was told at the time that ulcerative colitis was "incurable" and that I would be sick for the rest of my life.  I was also told by my treating gastroenterologist that there was no link between diet and the disease, and that I would be on medication for the rest of my life.

For the next 25 years, I struggled with this horrible condition. Even on a good day, I would still feel daily cramping and pain. During a flare-up, I would need to go on more serious medication – high dose steroids – and then deal with all the side effects. Along with this, starting at age 24 when I became an elementary school teacher, I was constantly exposed to illness and was regularly taking antibiotics to deal with what seemed like an endless case of strep throat and bronchitis. I would easily take 6-10 different courses of antibiotics during any given school year. I was also still struggling with constant allergies, and taking nasal decongestants like they were candy.

In the late summer of 2006, at age 35, I had a flare-up with the ulcerative colitis that was so violent that I was hospitalized. It was like nothing I had ever experienced, and in just over a week, I dropped 45 pounds. I went from 6 ft. 1 in., 198 pounds, to around 150 lbs. – at which point I stopped weighing myself. The doctors at Mount Sinai Medical Center tried everything, but nothing was working. The ulcerations in my colon had spread throughout the entire colon and they were bleeding uncontrollably. The amount of blood loss and crippling pain was beyond description. My life was at risk. Desperate to save my life, the doctors did a procedure that inserted a feeding tube into my jugular vein. I was given a powerful combination of medications that eventually worked. After almost a month in the hospital, I began to recover and was sent home, but this time on an even more powerful and dangerous medicine. This medicine, a strong immunosuppressive agent, had negative side effects, included putting me at high risk of cancer.

In the spring of 2012, at age 41, I was diagnosed with a cancerous tumor called a "classic seminoma" (a form of testicular cancer). Tumor markers and tissue samples confirmed this diagnosis. The doctors at Sloan Kettering and Mt. Sinai Medical Center wanted to remove the tumor and follow up with chemo and radiation. However, given my history of ulcerative colitis, they – and I – were very concerned that my body was not going to react well to the chemo and radiation – and the immune-suppressing drugs I was taking for the colitis would be problematic with such treatment. I was left in a quandary: do I just do the surgery and not the follow up chemo and radiation, which puts me at risk of it spreading to other locations? Or do I have the surgery, chemo, and radiation and risk the ulcerative colitis? I didn't like either option.

Incredibly, during that spring  I saw Dr. Fuhrman’s PBS special on healthy eating and was greatly inspired by his message. The doctors were talking to me about 5-year and 10-year survival rates, but I had a 2-year-old boy at the time – and I wanted the 50 year plan! Dr. Fuhrman’s special made me think that there might be another way that also addressed the causality of the disease in the first place. Against my doctor's wishes and advice, I held off on all conventional treatments and instead went to a healing retreat to follow your nutritional approach. When I told one of my doctors that I was going to hold off on his recommended treatment he said, “You are going to die and I am not going to be part of it!” and then kicked me out of his office.

What I had learned from Dr. Fuhrman is that if you give your body the right foods, and care for your body through exercise and rest, that your body will be able to heal itself and transform itself in ways you never imagined, and that even things like cancer and ulcerative colitis can disappear. Within only a few weeks of adopting these dietary changes my body began to transform. My energy level, clarity of mind, and overall physique made dramatic changes for the better. Sonograms of the tumor, taken that summer, showed that it was beginning to shrink in size and I began pulling myself very slowly and gradually off the medication for the ulcerative colitis because I was, for the first time since I was 15, feeling no symptoms in my gut. Fortunately, I found an amazing immunologist who monitored my progress and supported my efforts. Eventually I was able to completely remove myself from medicine for the colitis and the tumor shrank to nothing.  I was able to rid myself of cancer and ulcerative colitis without any of the conventional treatments and without any of the side effects associated with it. Along with that, my overall health has so greatly improved it is hard to fully quantify the before and after results.

Now, 48 years old, I can report with amazement that the cancer remains undetectable, the ulcerative colitis is gone, the allergies which plagued me my whole life are also gone, and I have not needed to take an antibiotic or medicine of any kind since 2012. I continue to live the lifestyle Dr. Fuhrman prescribes in his books. Every day over the past six years, I have followed Dr. Fuhrman’s dietary guidelines and have not deviated from the course once. I have never felt better, stronger, healthier, and more emotionally balanced. I thank him for saving my life and allowing me to thrive physically for the first time in my entire life.  This is the gift he has given me, and I am forever indebted and grateful.

I am raising my soon-to-be 9-year-old boy following the Nutritarian diet, and he is so incredibly healthy, so incredibly fast, and strong as an ox for his size! He loves eating this way for his health and for our planet. And for this, Dr. Fuhrman’s gift to my life, and the generations to follow, is priceless!

Kim lost 31 pounds and no longer has to wear her husband's larger size clothes... Read More