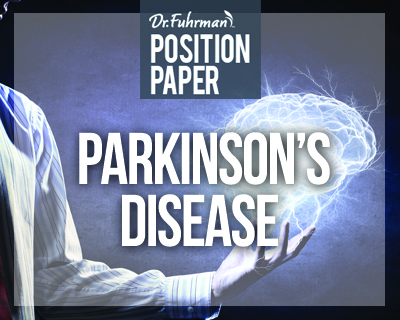 Parkinson’s disease (PD) is one of the most common neurodegenerative diseases, and it affects millions of people worldwide. Unfortunately, conventional treatments only produce moderate benefits, and none of them have been shown to slow the progression of the disease. However, excellent nutrition can reduce a person’s risk of developing it in the first place. A number of supplements continue to be studied for their potential to slow the progression of PD, with fewer side effects compared to conventional treatments.

With the exception of young-onset Parkinson’s, most PD is attributed to non-genetic and mostly controllable factors such as age, head trauma, consumption of well water and milk, and exposure to pesticides. Research has shown that certain nutrient deficiencies, especially DHA deficiencies, put us at a greater risk of developing brain disorders such as PD.

Because poor diet quality is a risk factor for Parkinson’s, Dr. Fuhrman’s protocol for treating PD includes the adoption of a Nutritarian diet focused on antioxidant-rich leafy greens, vegetables, fruits, nuts, and seeds, as well as proper supplementation which typically leads to a decreased need for conventional medications.

There are simple ways to greatly reduce your risk of developing this debilitating disease, and effective treatments for those who already suffer from PD. Learn the steps to protect yourself and your loved ones.