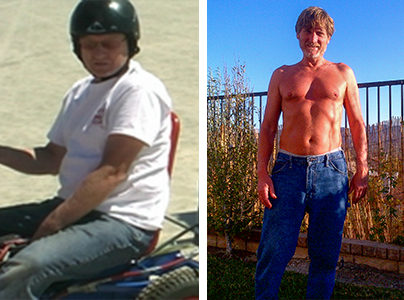 When Steve, an ex-Army paratrooper, eliminated meat from his diet he stopped having stomach problems, which, he says, dispels the theory that "real men eat meat"

I am a convert to your "way of eating" (I hate to use the word "diet" because it kind of implies a temporary program).  After I asked for advice online about my stomach problems, a doctor advised me to buy your book Eat To Live.  It was the best advice I ever got. I had stomach problems for years, and after many tests (colonoscopy, endoscopy, sonograms, MRI, blood work, etc.) the result was, "You probably have irritable bowel syndrome, and there is really nothing you can do about it.  In fact, it will probably just get worse."

I thought that can't be right. So, based on my own guesswork, I cut out alcohol and coffee, and that helped a little. Then I knocked out refined sugar, milk, and cheese and that helped a little more.  But I still had the pain and I was miserable and grouchy most of the time.  I read the South Beach Diet, and, as it was written by a cardiologist, I thought he knew what he was talking about.  Because of that, I had the idea that meat and eggs were good for you, and so I continued on those, while at the same time not consuming many veggies or fruits.  I now realize that was my problem.

I read Dr. Fuhrman's book and began his way of eating immediately.  Within two days my stomach pain began to subside.  Some pains returned on the fourth day, but the pains were different.  I read about detox and my symptoms were similar to that, so that was encouraging.  I stayed with it and on the fifth day the pain was nearly gone.  It's been two weeks since I started this way of eating and my stomach pain is completely gone. My weight has stabilized at around 162 pounds and I feel great.  I have zero cravings for any junk food, bread, pasta, meat, eggs, or cheese, and can taste foods much better (though I still miss the salt a little).  I can actually see my stomach muscles that I thought I had, but the belly fat was covering them all up.

There is a very powerful philosophy floating around, especially among men, that real men eat garbage, junk food and meat because they are tough men.  This is a very bad way of thinking that causes very serious health problems.  If one thinks that by not eating meat they will become a sissy, or the opposite, that eating meat will make them a man, then they will not follow your way of eating. I am an ex-Army paratrooper, can bench 225, and can do 70 pushups in two minutes.  I'm a father of two beautiful girls, have a lovely wife and I don't eat meat!

Kathy hated the way she felt and looked before she lost 85 pounds and now feels great... Read More