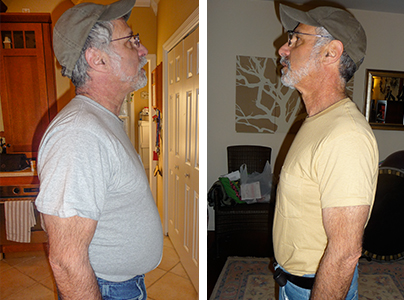 Followig his wife's prescription to switch to Eat To Live Anthony lowered his alarming high triglycerides, lost 40 pounds and loves his healthy foods

My husband, Anthony, has a very inspiring Eat To Live story.  Because of me he knew about Eat To Live for years, but resisted changing his diet. He loves Italian food, sandwiches and crème sauces. His idea of a quick and good lunch used to be three hot dogs on white hot dog rolls.  He often overate and would frequently eat two very large plates of food.  Anthony had diabetes for several years; his blood sugars were high enough for meds, sometimes spiking to the low 200s.

In the past I begged Anthony to follow Eat To Live, but he wouldn’t make the change. He continued to gain weight, and his blood test results got worse. Our family often wondered what was keeping him alive.  Anthony’s blood work results in January 2012 were a wake-up call. His triglycerides were 962, and this now alarmed him.  The doctor, of course, prescribed medications. I prescribed Eat To Live. Anthony knows I am against meds because they do not solve the problem, and they do not promote health, so he decided to skip the meds and follow the Eat To Live program in mid-January.

By mid-February, he lost 20 pounds and his glucose levels declined. He would remark on how good he felt and how he had more energy. No longer was he concerned that he won’t have enough food to fill him up. He now eats when hungry and will decline a meal if it’s not on the Eat To Live plan.

Fast forward to April 2012. His triglycerides are down to 85. I couldn’t believe it. He lost 40 pounds and his glucose levels have improved without meds. Now Anthony’s dedication to Eat To Live is impressive, and his improving numbers truly remarkable.  His weight went from 195 pounds to 155; fasting glucose from 150 to the 80s; total cholesterol from 305 to 186, and cholesterol/HDL ratio from 10.5 to 4 after only four months. A good amount of belly fat has melted away. He makes the most delicious Fuhrman recipes on his own. On a recent business trip he took a cooler full of veggies with him.  He has passed up buffets, his Mom’s Italian food (which he really loves) at a family gathering, birthday cake at his son’s 21st birthday, and snack tables at our dances. He eats salads when we’re in social settings or in restaurants.  No oil, no snacking, no processed foods, and low sodium. He has not cheated.

Whenever someone asks about his weight, he tells them about Dr. Fuhrman and the Eat To Live way of eating. Lots of people ask, and Anthony loves to talk. Whoever thought he would be one of Eat To Live’s biggest supporters?

Patricia felt doomed to suffer obesity and illness until she found Dr. Fuhrman on PBS; now she lost 72 pounds, is off blood pressure meds and is running again after a 20-year hiatus... Read More

It took Richard one year to lose 70 pounds and come off cholesterol drugs... Read More

Nanette lost 45 pounds after years of being overweight... Read More

Bill lost 44 pounds and is grateful for the support of the Member Center... Read More

Nathaniel, a certified personal trainer, says he is living proof you can be as ripped as a competition bodybuilder while as strong as a world-class power lifter following the Nutritarian diet style... Read More

Despite being a runner, Lou suffered high cholesterol, and other medicall issues; now he is in excellent health and passes his nutritional guidance to his patients... Read More

Being obese sapped Billy's energy and he feared for his life; now he lost 88 pounds and feels better than ever... Read More

Bettina didn't want to go down the same ill- fated path her parents lived; instead changed her lifestyle and lost 66 pounds... Read More