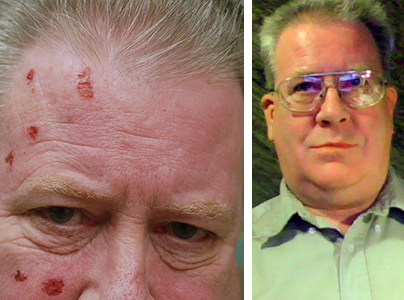 Along with AIDS Roger had multiple health problems, now his immune system improved beyond what he thought possible, he feels good and lost 65 pounds

In 1989 I discovered that I was HIV-positive and my world crumbled.  I had never been a drinker, but at that time HIV was associated with a death sentence, and if I had to die like all the images I saw on television, I was not going to feel it. So I spent seven years trying to drink myself to death. But, for some reason, I did not die. I went into treatment, got sober and re-entered the real world.  Because of my circumstances I lost everything but my life. I lost my house and my garden, and I was eating the Standard American Diet, like most Americans. This continued for several years and my health began failing. I developed heart disease, had a stint put in my artery, and one year later had to have an open heart surgery, a four-way bypass. As my HIV became full-blown AIDS, my immune system started crashing and I became sicker and sicker. I had continual bouts of chronic bronchitis and was also diagnosed with COPD (Chronic Obstructive Pulmonary Disease). I was literally, to quote my doctor, “a dead man walking.”

During this time my daughter and granddaughter were forced to move in with me. My daughter had been in a mentally abusive and controlling relationship for thirteen years and, instead of drinking, she turned to food to relieve her pain. I now had two people who needed me and I had to find a way to heal myself.

That’s when Dr. Fuhrman entered my world.  While watching PBS from my bed, I saw Dr. Fuhrman’s special and learned about Eat To Live. I went online, found Dr. Fuhrman’s website, joined the Member Center, and started printing recipes. The next day, I bought the ingredients to make Dr. Fuhrman’s Anti-Cancer Soup. I took Dr. Fuhrman’s New Year Pledge for 2012, and I now eat G-BOMBS every day.

I used to barely feel like getting out of bed, but now I have a treadmill that I use daily. My COPD is under control and I rarely use any of the three breathing meds I am on. It hasn’t even been a year and my immune system has improved beyond my wildest expectations. The amount of HIV in my blood has dropped from over one million parts per unit to being “undetectable” in my bloodstream! Some of this has been from the new medicine I am taking for HIV, but I know that the majority of the improvement is a result of my dietary changes.

At the start of Dr. Fuhrman’s diet, my blood pressure was out of control. My cardiologist kept increasing my medications with very little results, but during my last visit, she commented “I don’t know what you’re doing, but your blood pressure is beautiful.” In addition, my cholesterol has improved and I’ve lost 65 pounds in four months. And my daughter lost 75 pounds. Thank you, Dr. Fuhrman!

At the age of 76, Bob is thrilled to have lost 80 pounds and to have greatly reduced his diabetes medication... Read More

Before Robert changed his diet he thought death was at his door; he lost 75 pounds and credits Eat To Live with saving his life... Read More

Douglas felt doomed after a diagnosis of severe atherosclerosis; he became a Diamond Member, followed the diet and is now looking forward to a long healthy life... Read More