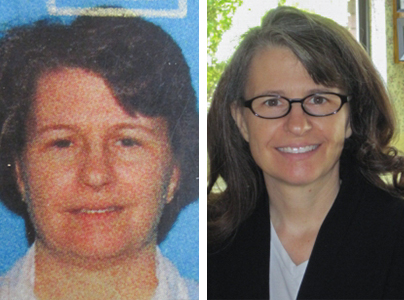 Ginger lost 40 pounds and many debilitating health symptoms; she looks so much better people don't recognize her

I didn't realize I was overweight, because I was so much thinner than everyone around me, until I read the book Eat to Live. Nonetheless, I knew I was sick. I spent about twenty hours a day in bed. Too exhausted to do anything but sleep, I could not exercise or spend time with my family.  When eating I would get excruciating pain in my stomach and chest along with heartburn, burping, and vomiting. I rarely had a bowel movement, about once a month. Chronic kidney infections, that I’ve had since age seven or eight, made my back ache like crazy. PMS and hot flashes were debilitating and ruining my marriage. I hurt all over from arthritis and weak muscles. I had no color in my lips because the anemia was so bad. Renault’s Syndrome kept me from going outside for fear of its excruciating pain in my hands and feet.

I was so depressed from the pain, fatigue, and sickness that I prayed to God to please end my suffering and let me die. He didn't let me die, but he did end my suffering by leading me to Eat To Live. I started the Eat To Live Six Week Challenge in January of 2010. I did it cold turkey from day one. Eliminating dairy, oils, and animal products, I felt somewhat better right away.  Cheese had been my staple food, and I ate about a pound a week. My stomach trouble subsided within a couple days of eliminating dairy and so did my cravings for cheese.  Amazingly, I don’t want it at all. But I still hated broccoli and most green things. Dr. Fuhrman’s salad and veggie recipes gave me hope as I actually liked them. California Creamed Kale was delicious; I couldn’t get enough. All the greens and other nutritious foods gave me tons of energy and I began having enough energy to give up my naps. I lost 40 pounds and my clothes started to fall off, literally. I began to walk and garden again.

Over the next several months all the symptoms just melted away except for a couple of lingering problems.  I decided to eliminate wheat and other gluten grains and the Candida, constipation, and eczema finally went away. I never would have figured that one out without the Dr. Fuhrman's forum. Even though I had given up tortillas and bread when I started Eat To Live, I still craved them until the wheat was totally out of my diet.  Wheat was on our menu every day before that. Now I am no longer addicted to wheat products. I have no desire to eat them. I love this new lifestyle.

After being away for a few years, we paid a visit to our old church. People I have known for close to thirty years did not recognize me. At first I was hurt until I realized I don’t look the same. A couple of months ago, the heater man came out to service the furnace. Since he has been to our home many times, he inquired about the elderly woman that used to live here. I told him it was me, and we had lived here for several years. He looked at me skeptically not believing that lumpy, tired, old woman and this vibrant, healthy one could possibly be the same person. Many comment that I look years younger and ask my secret. I tell them the secret is in the greens. Then I give them a copy of Eat to Live.

Laura lost 70 pounds and now has energy to play with her son... Read More

Stephanie's debititating chronic fatigue syndrome symptoms are much improved and her migraines are gone... Read More

John stopped taking his diabetes medication and has more energy than he has had in the past 20 years... Read More