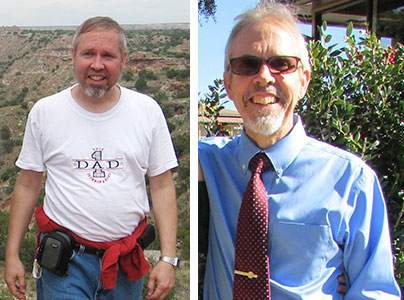 Joseph had 4 heart attacks and had stents in 5 arteries: following the vegan Nutritarian diet he no longer takes heart medication and has not had another heart attack for almost 4 years

I never had any serious health issues, until my late 40s when I began feeling bad all the time. The diagnosis was indigestion and acid reflux, for which the doctor gave me pills. I later ended up in the hospital, but no cause was identified. I am just 5’4” and weighed 120 pounds as a young adult.

My wife battled cancer for almost 5 years and passed away at age 46 in Jan. 2011. I was 52. One week later I had my first heart attack. Two weeks later I had my second heart attack. I ended up with stents in all 5 arteries surrounding the heart. Both heart attacks were mild, and quick response resulted in little or no damage to the heart. I did not have typical risk factors: high blood pressure, diabetes, obesity, smoking, drinking, family history.

But I followed the typical American diet, was very sedentary, and the stress of my wife’s death put me over the top. I did not even experience angina, but my symptoms were nausea, dizziness, severe pain in the right (not left) arm and feeling bad all over.

I started heart medications, improved my diet, and began mountain biking once a week. It took a year to significantly increase my endurance. My weight dropped from 141 to 125. I even backpacked to the bottom of the Grand Canyon and back up. I was feeling much better and thought I was doing great, but it was not enough. 2 ½ years later (Sept. 2013) I had a third mild heart attack. And 1 ½ years after that I suffered a 4th mild heart attack (March 2015).

A lady in the congregation I pastor visited me in the hospital and encouraged me to follow Dr. Fuhrman’s diet. I went home and read Eat to Live that week. I still had 6 children at home that I was caring for by myself, and I had read that the average heart attack patient only lives 8 years after having a heart attack. I immediately adopted a vegan Nutritarian diet. My weight quickly dropped from 125 or so to 110. Everyone was worried about me, but I felt great. After a while my weight rebounded to 115 and it stays within a couple pounds of it, regardless how much or little I eat. I eat all the vegetables, fruits, and beans I want, a little oatmeal, and a fair amount of seeds and nuts every day.

I work at home, and spend a large part of the day standing at my work desk. I also increased my exercise to several days a week. After a year, I stopped taking all heart medications. Recently I jogged two 5Ks, each under 40 minutes. I am here for my children. And I am still serving as pastor of a church at age 59. I follow God’s counsel at creation: “God also said: “Look, I have given you every seed-bearing plant on the surface of the entire earth and every tree whose fruit contains seed. This will be food for you.” (Genesis 1:29)