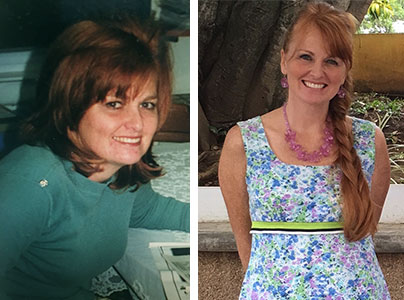 After being diagnosed with MS, April wisely chose to heal herself with nutrition rather than submit to injections to suppress her immune system, now she is free of symptoms

I am 50 years old and was brought up with the worst diet. But at the time I didn’t know what was good or bad so I ate a lot of meat, eggs, cheese and milk. Milk was my water really, I never drank water. I was also addicted to sugar. I did eat some vegetables and unfortunately those few vegetables were my excuse to feed my food addictions because in my mind, I ate healthy. I thought I was doing good and eating right and that I was healthy.  In 2006 half my tongue became numb and the right side of my body followed. I lost control of my bladder and slurred like a drunk. I dragged my right leg and was having a hard time gripping a pen to write with. It was astonishing to lose control of my body rather quickly! After an inked MRI I was diagnosed with Multiple Sclerosis. How could I become horribly ill?  Why didn’t I know that this could be possible? I prayed a lot.

An old friend told me to go visit an acupuncturist in Somers Point, New Jersey. My ears were open as was my heart. I listened to him tell me that this was totally treatable with diet and he loaned me two books, The China Study and Eat to Live.  He told me that I would have to give up all animal products and just the thought sent me into a bout of searching for inconsistencies in his advice. It couldn’t be healthy to give up all those things. What in the world would I eat? Where would I get protein?  I was clueless.

In accepting that this was not in fact a nightmare but my new reality, I went to the head of the MS department in Thomas Jefferson University searching for encouragement and hope and was told that it was a very cruel disease...in terrifying detail. I mentioned Eat to Live to the doctor and he told me that the three big lesions I had in my brain were permanent and that diet had absolutely nothing to do with MS. The only thing to be done was to have daily injections to suppress my immune system. I knew a couple of people with MS who later got cancer and I asked if suppressing my immune system was truly the only answer and he said yes. This guy was intimidating and I was weak and scared. It took great courage to tell him that I wanted to try the diet and if in six months my lesions were the same or worse I would submit to injections. He was not happy with me. I stood my ground.

I gathered all my ‘bad’ food into a laundry basket and took it to my relatives. My husband was totally on board and supported me when no one else did. I know I am fortunate to have him. It would have been harder. So, when I handed the basket  over I was sobbing. I considered Ben and Jerry my lovers. I loved cherry Garcia ice cream! It felt like someone very beloved died when I gave away that food. There was a big black hole inside and the only way I could describe giving up animal products is that it is just like grieving a death. It was awful. All my friends ate like I did.

I had no mentor so I bought $100 worth of used vegan cookbooks on amazon and began a notebook of tried and tested recipes. I was in unfamiliar territory and with little support. I wasn’t even sure it would work, but I wanted to get to that six -month mark so I could get that MRI and know if this was truly the answer to my problem. After six weeks of no cheating I started to feel the other side of my tongue! Can you understand what that meant to me? This was solid hope manifested! This meant that my body was repairing and not ripping me apart. I remember I was in the car driving when it happened and I wiggled my tongue around and screamed, shrieked, sang and thanked Jehovah!  I got the second MRI. It said that all three lesions had shrunk. When I took it back to the doctor he shrugged his shoulders and said that I was just especially inflamed when they took the original MRI. I thanked him and told him I was going to keep doing what was working for me. I never went back. Aside from occasional bouts of optic neuritis all my symptoms went away. After mom died my family moved to Boquete Panama because I read that those closest to the equator had less MS. We’ve been here four years. I adopted the no salt, oil and sugar diet along with the Eat to Live principals. I am lean, strong and healthy. I’d say I am 98 percent Nutritarian and 2 percent is when I am traveling and pressed. And I lost 40 pounds

You’d think people would be happy about this, but I have to tell you that you have to be strong to do this healthy and amazingly good way of eating. Even people I know love me have given me a hard time. They try to convince me that good oil and salt is essential for health. (As if there were no good oils or salt in whole foods) or that a little bit of feta won’t hurt me. Others have accused me of abusing my teenage son with my diet. I’m totally serious, I abuse him with vegetables and whole grains and fruits! Meanwhile my family is beautiful and not overweight and healthy, but the ones giving these observations...ahhhh not so much.

Still it hurts to be accused of being extreme and abusive. I am the ridiculous one their eyes. One of the funniest things my son ever said to me in anger when I wouldn’t let him buy an expensive pair of sneakers was, “You give me NOTHING but vegetables!”  (He was parroting my haters). I thanked him for the compliment lol. So, I must explain how I put up with my neigh Sayers, mockers, rude people and just uneducated people. I remember how little I knew about nutrition before all this happened. I wasn’t so smart myself.

How do I not back slide into old habits? I remember how it felt to wet my pants in public and feel my body rip itself apart from the inside out. It’s not an intellectual exercise for me. I remember how it felt. Now I eat better than I ever did before all of this.  We have so much help now with recipes and Dr. Fuhrman’s support group. It is so much easier than in 2006 for me to keep the food tasty and interesting. I use more local fruits and vegetable here in Central America then the locals! In fact, many of our Panamanian friends ask me for recipes. So, I have a few keys for success. 1. Pray, Hope. 2. Green smoothies bowls full of fruit in the morning, big salad for lunch and soup for dinner. I change the ingredients depending on what is in season. It never feels like the same food because it’s not the same food. I choose a theme each week whether Italian, Mediterranean, Indian, etc. and add this to the mix. We always have G-BOMBS available.

The conclusion is I’ve learned that the lies we tell ourselves do not produce good results. So being honest with myself and putting what others say or think aside I had to take responsibility for my own health. I was made with the ability to heal, it’s God given. I just had to learn how to not impede my own body from doing what it so desperately wanted to do...heal me.  I am so grateful.

Linda lost 72 pounds; is off all medications and has more energy then ever despite having multiple sclerosis... Read More

Rebecca was plagued by two autoimmune diseases including MS; now she no longer takes medication for MS and has reduced her thyroid medication; feels better than ever... Read More

Debbie had multiple ailments including loss of energy, swollen ankles, fast heart beats; now she is energetic, her anxiety is better an she is on the road to achieving her weight loss goal... Read More