Your best defense against coronavirus is a strong immune system, click here to learn more.

Are Eggs Healthy? Learn The Truth 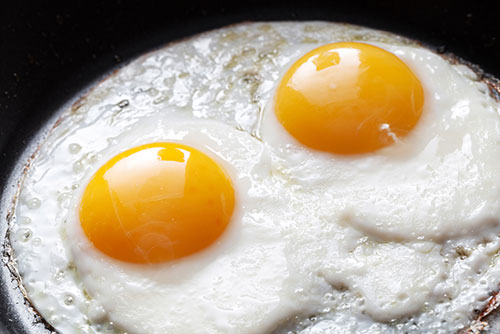 Eggs are one of the most concentrated sources of cholesterol in the American diet, but how much does dietary cholesterol actually impact blood cholesterol and heart disease risk?

When a study investigated egg consumption and cigarette smoking in relation to atherosclerotic plaque in the carotid artery headlines proclaimed, “Egg yolks almost as bad as smoking.” But is this a valid assessment of the data? Let’s examine all the science on eggs and heart disease to find out.

Many studies have investigated this, and the consensus is that dietary cholesterol does raise serum total cholesterol somewhat, but to a very small degree compared with dietary saturated or trans fat.1, 2 Dietary cholesterol elevates serum LDL cholesterol. Meta-analysis of several studies showed that the dietary cholesterol from eggs is associated with an increase in the ratio of total cholesterol to HDL (“good”) cholesterol, which is an indicator of increased cardiovascular risk. These researchers reported that the cholesterol from 3-4 eggs per week would elevate the total cholesterol to HDL ratio to an amount that would increase heart attack risk 2.1 percent.3 This might seem like a small increase in measurable risk, however such studies grossly underestimate risk, because they feed eggs to those already eating a significant amount of animal products. If you are already on a diet that places you at high risk for heart disease, adding additional eggs only increases the risk a bit, but for a person eating a flexitarian, vegan or nutritarian diet, adding eggs would likely show a dose-dependent increase in heart disease risk. In other words, your risk would increase proportional to the amount of eggs eaten. In addition, The Physicians’ Health Study reported a 23 percent increase in death risk in those who ate more than one egg/day.4

Alarmingly, these studies consistently found that diabetics (who are already at increased risk) who ate more eggs did increase their risk by a lot.

The Nurses’ Health Study, The Health Professionals Follow-up Study, and The Physicians’ Health Study reported that diabetics who ate more than one egg/day;doubled their cardiovascular disease or death risk compared to diabetics that ate less than one egg per week.5,6 A Greek study of diabetics reported a five-fold increase in cardiovascular death risk in those eating one egg/day or more.7

Collectively from this data, we can conclude that eggs are likely only to be dangerous in large quantities (more than one egg/day) for healthy individuals, but could be more problematic for populations at risk of cardiovascular disease, such as diabetics. Interestingly, eating five eggs per week or more is also associated with an increased risk of developing type 2 diabetes (as well as prostate cancer).8,9

Significantly, in contrast, cigarette smoking is very clearly linked to heart disease, stroke, and death. Cigarette smoking is estimated to cause over 400,000 deaths per year in the U.S. alone, one-third of which are related to cardiovascular disease.10

To evaluate eggs, cigarettes, and carotid plaque twelve-hundred patients answered questionnaires on their diet and lifestyle, and had ultrasound-based measurements of their total carotid artery plaque area, a strong predictor of future cardiovascular events.11 The investigators found similar steep increases in plaque area with increasing “pack-years” of smoking (number of packs/day multiplied by number of years of smoking) and “egg-yolk years” (number of egg yolks/week multiplied by number of years consumed).

Importantly, egg yolk consumption and smoking history were not significantly correlated. This means that the people that ate the most eggs were not necessarily the ones who smoked the most. Since carotid plaque area increased more steeply with egg-yolk years and pack-years than with age, the researchers concluded that both factors accelerate plaque development.

The group with the greatest number of egg-yolk years (200 or more) had plaque development equivalent to 2/3 the plaque development of those with the greatest number of pack-years of smoking (more than 40). For example, the data suggests that someone who had eaten four or more eggs/week for 40 years would have 2/3 the amount of plaque as someone who smoked one pack of cigarettes a day for 40 years, other factors being equal.

In addition, they found that subjects eating more than three eggs/week, compared to less than two eggs/week, had significantly more carotid plaque area – even after statistical controls for a number of factors, including serum cholesterol. This indicates that eggs may increase atherosclerotic plaque development in ways unrelated to elevating blood cholesterol.

So what is the bottom line on eggs?

Eggs do contribute some vitamins and minerals and are likely one of the better choices when it comes to animal foods.12 However, there is no nutritional advantage for getting vitamin A/carotenoids, folate, minerals, etc. from eggs rather than from plant foods. Plus, eggs are extremely rich in animal protein, which is not health-promoting.

Although previous studies have not seen increased cardiovascular risk in individuals eating up to one egg/day, this study has identified increased carotid artery plaque in individuals eating three eggs per week or more. Taking all this research into account, and comparing to the sobering statistics on cigarette smoking, “eggs are almost as bad as smoking” is probably an overstatement. Conversely, eggs may be more harmful to cardiovascular health than the earlier studies suggested. Larger, long-term studies will help to determine the magnitude of risk associated with eggs.

If you are at risk of cardiovascular disease, the potential risks of egg consumption must be considered. The associations of eggs with diabetes and prostate cancer must also be considered.
Those with diabetes or cardiovascular disease or at high risk for these conditions (overweight or high cholesterol) should not eat eggs, though 1-2 eggs per week in a slim, healthy individual who is not eating many other animal products is unlikely to be harmful.