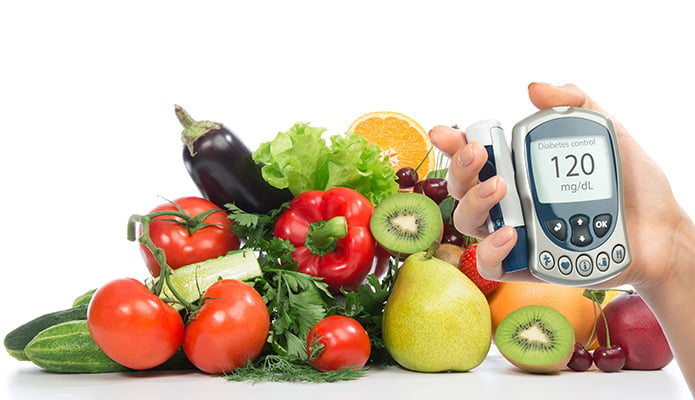 For diabetics and pre-diabetics especially, new research proves what moms having been telling their children through the ages, “eat your veggies, they’re good for you.”  A recent study published in the British Journal of Nutrition reported that higher plant protein intake is associated with a reduced risk of type 2 diabetes. In their analysis, they estimated that replacing one percent of calories from animal protein with calories from plant protein would decrease the risk of type 2 diabetes by 18 percent.1

At first glance, it may seem like the dietary effects on diabetes would be only relevant to carbohydrate-containing foods. The more low-carbohydrate, high-protein foods in your diet, the better; those foods don’t directly raise blood glucose. However, that is a too simplistic view of the development of type 2 diabetes. Type 2 diabetes is not only driven by elevated glucose levels, but also by chronic inflammation, oxidative stress, and alterations in circulating lipids (fats).2-5

In addition, there has been considerable amount of evidence that red and processed meats are linked to a greater risk of type 2 diabetes This recent study is not the first one to make the connection between protein source and diabetes. In fact, many studies have compared plant and animal protein intake with respect to diabetes risk. A larger study published in 2016 found an increase in type 2 diabetes risk in those with the highest animal protein intake. The study  also performed a meta-analysis of eleven previous studies, which detected a 19 percent increase in risk in the groups with the highest animal protein intake.6

A 2010 meta-analysis of 12 prospective cohort studies concluded that high total meat intake increased type 2 diabetes risk 17 percent above low intake, high red meat intake by 21 percent, and high processed meat intake by 41 percent.7 Since these foods don’t directly cause an increase in blood glucose, how might they raise diabetes risk?

Too much iron increases the risk for type 2 diabetes. Heme iron, found only in animal products, is highly absorbable compared to nonheme iron in plant foods. A diet high in animal products over time results in excess body stores of iron.  A major connection between high heme iron intake and diabetes is that iron in excess has pro-oxidant properties; this can contribute to oxidative damage to pancreatic beta cells and insulin resistance. High dietary heme iron and high body stores of iron are associated with increased risk of type 2 diabetes.16  Nonheme iron (from plant foods) does not carry the same risk of excess because of its lower absorbability.

Animal protein and plant protein are indicators of animal foods and plant foods. Some will be lower or higher in fat, but animal foods generally have a greater ratio of saturated to unsaturated fats, suggesting that high animal food intake could negatively affect insulin sensitivity.

Importance of nutrient-rich foods:  eliminating meat is not enough

As shown, there are many negatives to animal foods when it comes to diabetes risk. However, it’s not simply an issue of avoiding meat; which plant foods you eat matters. Micronutrient-rich, whole plant foods are protective.  For example, a large analysis of the Nurses’ Health Study and Health Professionals Follow-Up Study (including over 200,000 participants) scored the participants’ diets based on a “healthful plant-based diet index,” in which foods like vegetables, legumes, fruits, nuts, and whole grains increased the score and foods like fruit juices, sweetened beverages, refined grains, potatoes, sweets, and animal foods decreased the score.

A healthy diet must be composed mostly of whole, fiber-rich, high-nutrient plant foods.  It’s not enough to eat a vegan diet; even if only a small amount of animal products is included. My decades of experience caring for people with type 2 diabetes has enabled over 90 percent of them to become non-diabetic; this has been documented in medical publications. In a study of patients with type 2 diabetes following a Nutritarian diet, after one year 90 percent of participants were able to eliminate or reduce their diabetes medications, and the mean HbA1c was 5.8 percent, which is in the normal (non-diabetic) range.23

Every physician caring for patients with diabetes and pre-diabetes, as well as patients themselves must be informed about this life-saving approach, as described in my book The End of Diabetes. Type 2 diabetes is reversible in the vast majority of cases, and those with type 1 diabetes can improve their life expectancy, health and quality of life.