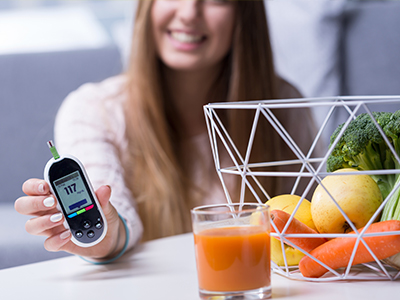 With proper care, a type 1 diabetic can live a long and healthy life, with almost no risk of heart attack, stroke, or complications. Type 1 diabetics need not feel doomed to a life of medical disasters and a possible early death. With a truly health-supporting Nutritarian lifestyle, the type 1 diabetic can have a disease-free life and a better than average life expectancy.

Diabetes is a serious disease

With conventional care of type 1 diabetes, the long-term prognosis is dismal. Type 1 diabetes usually begins to do its damage during childhood, and carries the same risks of type 2 with complications such as damage to the kidney, eyes, and nervous system.

Both type 1 and type 2 diabetes accelerate the aging of our bodies. Having type 1 or 2 diabetes greatly speeds up the development of atherosclerosis, or cardiovascular disease; in fact, diabetes doubles the risk of heart attack and stroke.

About 10 percent of diabetes cases are type 1. In type 1 diabetes, which generally occurs earlier in life, the immune system attacks the beta cells in the pancreas, which produce insulin, resulting in insulin deficiency. For that reason, in almost all cases, type 1 diabetics will always require insulin to prevent too much glucose in the blood and life-threatening ketoacidosis (a serious condition that can lead to a coma and even death).

A diagnosis of type 1 diabetes is not a guarantee of poor health and a shortened lifespan. It is not type 1 diabetes itself that causes such negative health consequences. Rather, it is the combination of the diabetes and the typical nutritional “advice” given to these patients – advice that requires them to use needlessly large amounts of insulin. Excess insulin accelerates atherosclerosis, increases cancer risk and damages the body. 1-3

While the Standard American Diet (SAD), which has spread to all industrialized nations, is dangerous for everyone, it is particularly deadly for diabetics. In short, if a diabetic eats the SAD, poor health and a premature death is a common eventuality.

Live a Long and Healthy Life with Type 1 Diabetes

I find that when type 1 diabetics adopt my high-nutrient dietary approach, they reduce their insulin requirements by at least one half. They protect their body against the heart-attack-promoting effects of the American diet style. They no longer have swings of highs and lows, their weight remains stable, and their glucose levels and lipids stay under excellent control. Even though the type 1 diabetic will still require exogenous (external) insulin, they will no longer need excessive amounts of it.

Remember, it is not the rype 1 diabetes that is so damaging, it is the SAD, the typical dietary advice given to type 1 diabetics, and the excessive amounts of insulin required by the SAD that are so harmful. It is simply essential for all type 1 diabetics to learn and adopt a Nutritarian diet as described in my book The End of Diabetes.

They can use much less insulin, achieve a normal, healthy lifespan and dramatically reduce their risk of complications later in life.

John was a 22-year-old college graduate with type 1 diabetes since the age of six. He was five foot, eight inches tall, weighed 190 pounds and was taking a total of 70 units of insulin daily. He was referred to my office by his family physician as he was having swings in his glucose levels, too high at times and at other times dangerously low. He also wanted to learn more about nutrition to improve his health and reduce his future risks from having diabetes.

I was impressed by his intelligence and desire to change his eating habits to better his health. We spent lots of time discussing the typical problems that befall most diabetics, and I explained to him that using 70 units of insulin a day was part of the problem. I told him that if he follows my recommended diet-style he will stabilize his weight at about 145 pounds and will only require about 30 units of insulin a day. With this lower level of insulin, to mimic the amount of insulin a non-diabetic makes in the pancreas, he can have a life without the typical health issues that befall diabetics.

We cut his nighttime insulin dose down by 10 units and his mealtime insulin from 10 to six units as he began the diet. Over the next two weeks we gradually tapered his insulin and found that he only needed 20 units of Lantus insulin at bedtime and 4 units before each meal for a total of 32 units a day. Almost immediately, with my dietary recommendations, his sugars were running in the favorable range, and he no longer experienced dangerous drops in his blood sugar.

He lost 13 pounds over the first month and by month three he weighed 167 pounds, a loss of 23 pounds. He was excited about what he learned and was more hopeful about living with diabetes.

I am convinced that with a Nutritarian diet-style, those with type 1 diabetes can have a long and disease-free life. I feel it is imperative that all type 1 diabetics learn about this life-saving approach.

This simple and effective plan in The End of Diabetes is based on delicious, healthful foods, starts working immediately, and puts you on the path to a long, happy, disease-free life. Of course, the road to wellness involves making the commitment to regular exercise as well. In The End of Diabetes, I also describe exercises you can do even if you are beginning at a low level of fitness.

If you have diabetes, you may also want to consider purchasing a membership to DrFuhrman.com where you can find support from both peers in the Nutritarian Network and me and my medical staff in the Ask the Doctor member communities.

Be advised, if you are on medication, it is important that you do not change your diet without medication adjustment under the guidance of a competent physician.

I wish you enduring health and a long life... it can be yours.