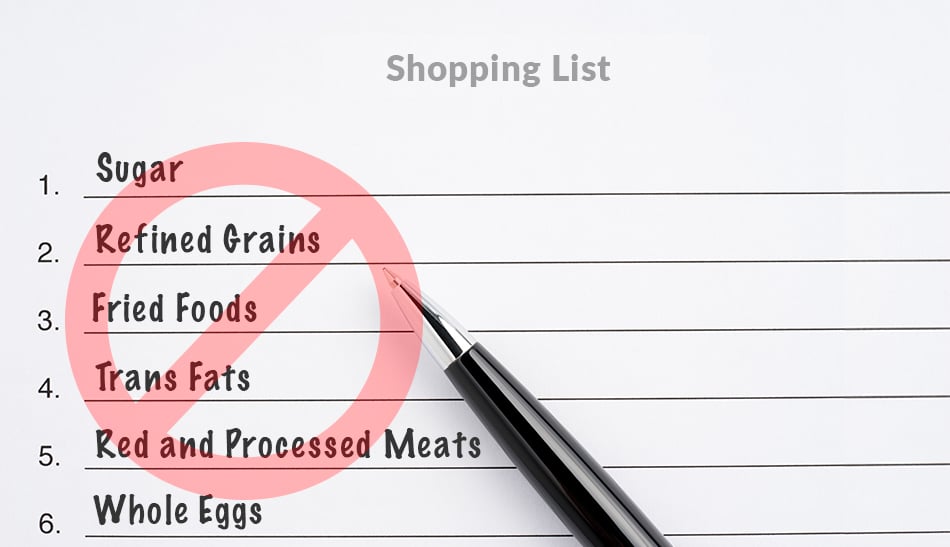 Over 25 million people in the United States have diabetes, and diabetes takes an enormous toll on the health of our population.1 Diabetes accelerates aging; damaging the kidneys, cardiovascular system, eyes and nerve tissue, and increases cancer risk.2-4

The devastating complications and premature deaths associated with diabetes can be prevented. The primary cause of the parallel increases in obesity and diabetes is the nutrient-depleted American diet. The worst foods for diabetes – the foods that elevate blood sugar, reduce insulin sensitivity and increase type 2 diabetes risk – are the foods that are most common in the standard American diet.

Since diabetes is characterized by abnormally elevated blood glucose levels, of course it is wise to avoid the foods that cause dangerously high spikes in blood glucose – primarily refined foods such as sugar-sweetened beverages, devoid of fiber to slow the absorption of glucose into the blood. Fruit juices and sugary processed foods and desserts have similar effects. These foods promote hyperglycemia and insulin resistance, and promote the formation of advanced glycation end products (AGEs) in the body:  AGEs alter the normal, healthy function of cellular proteins, stiffen the blood vessels, accelerate aging, and promote diabetes complications.5, 6

Refined carbohydrates like white rice, white pasta, and white bread are missing the fiber from the original grain, so they raise blood glucose higher and faster than their intact, unprocessed counterparts. In a six-year study of 65,000 women, those with diets high in refined carbohydrates from white bread, white rice, and pasta were 2.5 times as likely to be diagnosed with type 2 diabetes compared to those who ate lower-GL foods such as intact whole grains and whole wheat bread.7 An analysis of four prospective studies on white rice consumption and diabetes found that each daily serving of white rice increased the risk of diabetes by 11percent.8 In addition to the glucose-raising effects, cooked starchy foods also contain AGEs, which promote aging and diabetes complications.9, 10

Potato chips, French fries, doughnuts and other fried starches start with a high-glycemic food, and then pile on a huge number of low-nutrient calories in the form of oil. Plus, like other cooked starches, fried foods contain AGEs. 9, 10 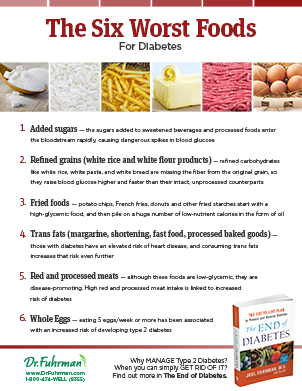 In addition to their cardiovascular effects, saturated and trans fats reduce insulin sensitivity, leading to elevated glucose and insulin levels, and greater risk of diabetes.13

Eating 5 eggs/week or more has been associated with an increased risk of developing type 2 diabetes.15 When it comes to heart disease, eggs have been a controversial topic. However, for those with diabetes, the research is not controversial; there are clear links in many observational studies to large increases in risk. Large prospective studies such as The Nurses’ Health Study, Health Professionals Follow-up Study, and Physicians’ Health Study reported that diabetics who eat more than one egg/day double their cardiovascular disease or death risk compared to diabetics that ate less than one egg per week.16, 17 Another study of diabetics reported that those eating one egg/day or more had a five-fold increase in risk of death from cardiovascular disease.18, 19

If you want to avoid diabetes and enhance your life expectancy, steer clear of these five foods and adopt a high-nutrient diet, which has been shown to reduce HbA1c into the non-diabetic range, reduce or eliminate the need for medications and dramatically improve blood pressure and triglycerides in diabetic patients.20 Read about the five best foods for diabetes here, and learn more in my book The End of Diabetes. If you know of anyone with diabetes – type 1, type 2 or pre-diabetes – it is absolutely essential they read this book; it could save their life.