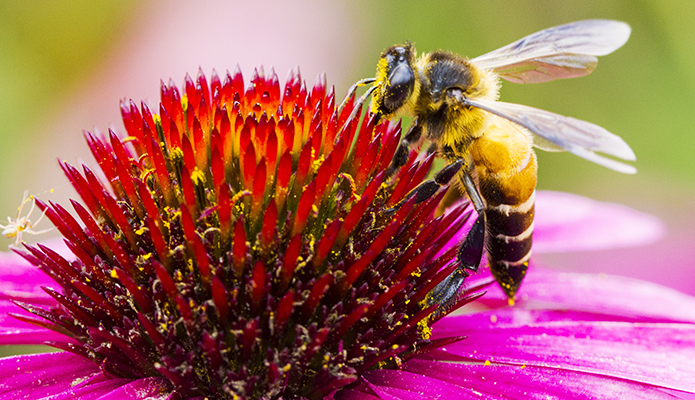 Have you heard the buzz about bees? Disturbing losses of bee colonies has become a matter of disturbing societal issues. In recent years, we learned about Colony Collapse Disorder (CCD), a mysterious and devastating loss of bee colonies in the U.S., Canada and Europe. The first reports of these unexplained and catastrophic bee deaths began in 2006. In the 2006-2007season, CCD affected about 23 percent of commercial U.S. beekeepers, and some beekeepers lost 90 percent of their hives. Since then, CCD has showed no signs of slowing; substantial yearly losses of bees, 30 percent or higher has become the norm.1-2

Answers started to surface in 2007. Scientists began to identify viruses in U.S. bee colonies that had suffered CCD.1 Soon, it was known that healthy and CCD-stricken colonies were plagued with numerous viruses and parasitic microbes, and seemed to have impaired ability to produce proteins that protect against infection.2-3 Scientists then began to ask whether there was an environmental factor that was causing the bees to be vulnerable to viral attack.

In early 2012, two studies published in Science implicated a class of pesticides called neonicotinoids. Neonicotinoids are a class of neuro-active insecticides similar to nicotine. In these studies, bees exposed to neonicotinoids exhibited a reduced growth rate, produced fewer queens, or had impaired navigation and food-gathering abilities. The scientists concluded that neonicotinoids, although the commonly encountered doses may not be directly lethal to bees, could contribute to CCD in an indirect way, by harming bees’ abilities to grow, return home to their hives or get adequate nutrition.4-6

Now that several additional studies have found similar negative effects on bee behavior and cognition, evidence that neonicotinoids harm bees and are a major contributor to CCD has grown more convincing.7-9

Neonicotinoids began to be used in the 1990s, as less-toxic-to-humans alternatives to organochlorine and organophosphate pesticides. An important point about these pesticides is that they are usually used in a “systemic” manner; when crops are treated, the pesticides spread throughout all parts of the plant, including the nectar and pollen. Bees are exposed to these pesticides via many major commercial crops including canola, corn, cotton, sugar beet and sunflower; plus many vegetable and fruit crops.5-6,10

Europe Bans Neonicotinoids; U.S. does not

The pesticide industry and some scientists claim that the evidence against neonicotinoids is not yet conclusive, but it has been convincing enough for some agencies to propose bans on these pesticides as a safety measure. The European Food Safety Authority, for example, produced a report in January 2013 concluding that neonicotinoids pose unacceptable risks for bees and should not be applied to flowering crops.

As a result, a two-year suspension was proposed in the European Union, and was passed in late April—it went into effect December 1st.11-12 Currently, France and Germany have partial bans on neonicotinoid use.13

In March 2013, a coalition of beekeepers and environmental interest groups filed a lawsuit against the U.S. Environmental Protection Agency, alleging that they have failed to protect bees and the crops they pollinate by rushing neonicotinoids to market with inadequate review.

The USDA and EPA released a joint report on U.S. honeybee health, stating that multiple factors contribute to bee colony declines, and that further research is required to determine the risks posed by pesticides. The report does acknowledge, “Laboratory tests on individual honey bees have shown that field-relevant, sub lethal doses of some pesticides have effects on bee behavior and susceptibility to disease.”

The dispute over the threat to bees posed by the class of neonicotinoids, took a dramatic new turn on September 10, 2015, when the Ninth Circuit Court of Appeals overturned federal approval for a new formulation called sulfoxaflor. Judges found that the Environmental Protection Agency (EPA) had relied on “flawed and limited” data, and its green light was unjustified given the “precariousness of bee populations”.

As a result of the US decisions, rules on the controversial chemicals in the US are in bizarre contradiction. The US has approved most neonicotinoids while now banning sulfoxaflor.

What Can We do?

This is a sincere emergency to our organic farming movement and to the global food supply, to lose the natural way flowering plants are pollinated. Bees are crucial for pollination of many crops such as apples, almonds, and citrus fruits. According to the U.N., about 70 percent of the crops that provide 90 percent of human food is pollinated by bees.14 We are dependent on bees, and they are disappearing rapidly. It is alarming to say the least.

You can take action at home. Since wild bee populations are also declining, in part due to loss of habitat, you can help by providing bees with new habitats. You can plant a garden of vegetables and plenty of bee-friendly flowers, or even become a backyard beekeeper.