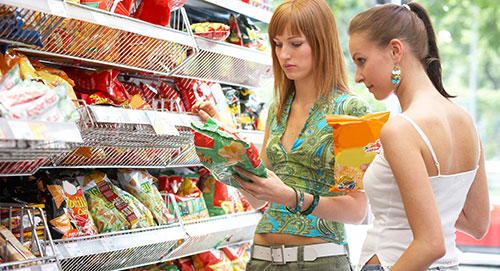 The unhealthy foods at the center of the standard American diet are addictive, leading to cravings and "toxic hunger.”   Addictive substances involve both pleasure and pain. An addictive substance is toxic and, therefore, produces uncomfortable withdrawal symptoms when the body attempts to detoxify the waste products left behind. The withdrawal symptoms include headache, fatigue, shakiness and when we feel such discomfort eating relieves the symptoms. This is because as the body begins digestion it stops detoxification. So we mistakenly believe that our uncomfortable feelings are hunger. As a result, we are almost forced to eat too frequently in order to lessen the withdrawal symptoms from our low nutrient diet. This leads to progressively eat more of the addictive food, creating a vicious cycle.  Becoming overweight then becomes inevitable.

Scientists studying addiction are confirming the assertion that unhealthy food is indeed addictive. Scientists following up their preliminary data on the subject published a study in Nature Neuroscience showing that drug addiction and compulsive eating have the same effects on the brain. They desensitize brain reward circuits.1 In the brain, eating is motivated by pleasure and reward.

The scientists used electrodes to measure the rats’ reward thresholds. The reward threshold is the minimum amount of stimulation that produces feelings of satisfaction. As the experiment continued, extended access rats had progressively higher reward thresholds. This means that their reward circuitry became less and less responsive, and a greater amount of unhealthy food was therefore required to satisfy their appetites. Even when the rats were taught to anticipate an electric shock, they kept eating, not even trying to avoid the shocks. This compulsive behavior in the face of negative consequences is a hallmark of addiction.

The scientists traced these effects to a decrease in levels of specific dopamine receptors in the striatum region of the brain.

These exact neurobiological changes have been shown to occur in rats that are given extended access to heroin or cocaine. In fact, after access to the unhealthy food was no longer permitted, withdrawal (measured by continued elevation of the reward threshold) persisted in these rats for a full 14 days. Rats in withdrawal from cocaine have been reported to experience withdrawal for only 48 hours.

These results demonstrate how powerfully addictive – and powerfully toxic – unhealthy food is. In the Western world, we have extended access to unhealthy food; nutrient-deficient processed food seems to be everywhere we turn. In such an environment it can be  easy to become addicted, progressively gain weight, and suffer  serious health consequences.

Only by removing the toxic, addictive foods from our diets and replacing them with health promoting foods, can we break the health damaging cycle of toxic hunger and achieve excellent health.