The DASH diet vs. The Nutritarian Diet 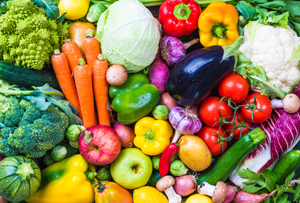 With your heart at stake and your life on the line, it is imperative to know what diet program is the best. U.S. News & World Report evaluated 38 popular diet plans and ranked them. They chose the DASH (Dietary Approaches to Stop Hypertension) diet as their number one choice, and recently Nutrition Action agreed. They called the OmniHeart diet (a slight variation on the DASH diet) the “healthiest diet to follow if you’re not a vegetarian.”

The U.S. National Heart, Lung, and Blood Institute developed the DASH diet to specifically lower blood pressure. It emphasizes vegetables, fruits, and whole grains; to be low in saturated and trans fats; to be low in sodium; and to be rich in potassium, calcium, magnesium, fiber, and protein.

There is evidence from randomized controlled dietary intervention trials that the DASH diet helps to reduce blood pressure and LDL cholesterol. But are these reductions enough to offer significant protection against cardiovascular death?

Why the Nutritarian diet wins over the DASH diet

In my book The End of Heart Disease, I devote one entire chapter to comparing my Nutritarian dietary guidelines to a number of diet plans, including the DASH diet, that are typically recommended to patients with heart disease or have risk factors for heart disease.

The DASH diet is an improvement compared to the Standard American diet, but it’s far too permissive to be called “the healthiest.” The DASH diet does not emphasize nuts, seeds, and beans, which have profound and extensively researched cardio-protective qualities. In addition, it encourages too much consumption of animal products, including up to 3 servings of dairy daily. On the positive side, the DASH diet emphasizes vegetables and fruits. However, no distinction is made to specifically encourage eating leafy green and cruciferous vegetables.

It’s clear that the DASH diet is not the healthiest, when we compare the effects of the DASH diet (and OmniHeart diet) on blood pressure, cholesterol levels, and body weight to those of the Nutritarian diet reported in my recent study in the American Journal of Lifestyle Medicine. This study used survey data and case histories to demonstrate the dramatic weight loss and cardiovascular benefits possible with a Nutritarian diet.

The OmniHeart trial tested three different modified versions of the DASH diet: one was rich in carbohydrate, one in protein (half plant protein), and the third high in unsaturated fat (primarily monounsaturated). Similarly, in the OmniHeart trial, systolic blood pressure was reduced on average 9 mm Hg and diastolic 4-5 mm Hg.3 These improvements are on par with those that are typically observed with blood pressure-lowering drugs.4-8

Although this may seem impressive, the improvements reported by respondents following a Nutritarian diet were almost two and a half to three times greater. Among the 443 survey respondents with hypertension who had made the change to a Nutritarian diet, there was a 26.4 mm Hg average reduction in systolic blood pressure, and 14.7 mm Hg in diastolic blood pressure. Due to these improvements, there was a 60 percent reduction in the use of blood pressure-lowering medication.9

The DASH diet has been reported to reduce total cholesterol by 13.6 mg/dl and LDL cholesterol by 10.7 mg/dl. A decrease in HDL of 3.7 mg/dl was also observed, and no effect on triglycerides.10 In the OmniHeart trial, all three plans reduced cholesterol by 11-14 mg/dl.3

A dietary intervention study on a Nutritarian diet-style published in 2001 found that LDL cholesterol was reduced by 33%. 11 More recently, my study in the American Journal of Lifestyle Medicine found an average 42 mg/dl decrease in LDL cholesterol in respondents who were not taking cholesterol-lowering medication and switched to a Nutritarian diet; in addition there was an average decrease in triglycerides of 79.5 mg/dl.9

When tested side-by-side, the DASH diet combined with calorie restriction and exercise induced weight loss of an average of 19 pounds over 4 months, whereas the DASH diet alone resulted in less than one pound of weight lost.12 The OmniHeart trial lasted 41 days, and the average weight loss was about 2 pounds. With such a short duration, it is unclear how effective the OmniHeart diets would be for weight loss.3

The DASH and OmniHeart diets would be a notable improvement for most Americans: more vegetables and fruits, fewer sweets, more whole grains, and a smaller amount of oil. However, just because a diet plan is better than the disease-causing Standard American Diet doesn’t mean that it will be effective for reversing heart disease or preventing heart attacks and strokes. We can do better.

Despite its name and purpose, the Dietary Approaches to Stop Hypertension diet has only a modest effect on blood pressure compared to a Nutritarian diet. The emphasis on green vegetables, beans, nuts, and other foods with documented protective effects makes the Nutritarian diet the most effective, safest and healthiest way to eat.